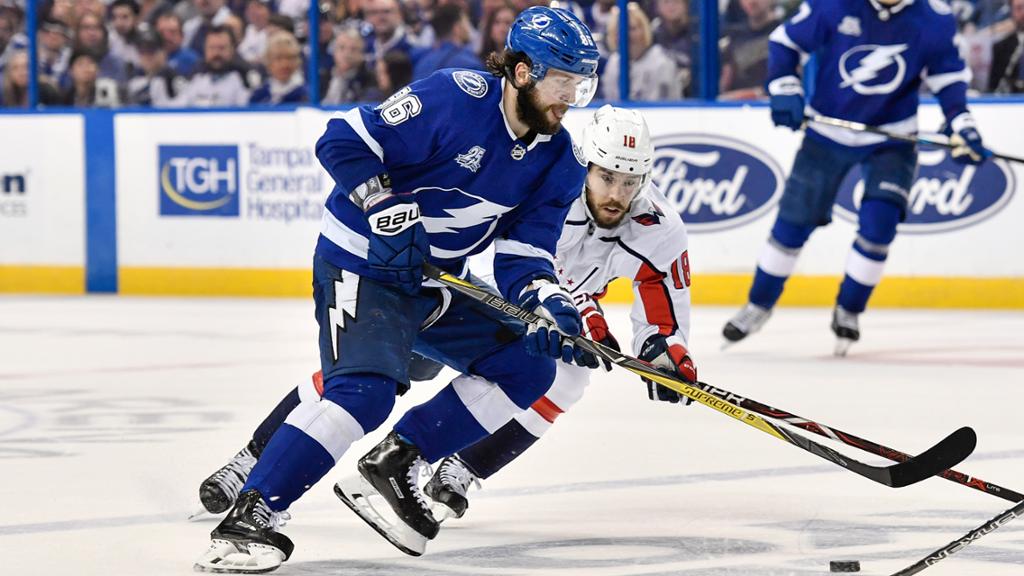 The Tampa Bay Lightning have some serious soul searching to do.

The Lightning dropped Game 2 of the Eastern Conference Final Sunday Night, Washington blitzing the Bolts 6-2 to take both games at AMALIE Arena.

But there is a glimmer of hope.

The Lightning have rallied from an 0-2 hole in the postseason before. Against the same Washington franchise, Tampa Bay lost both home games in the 2003 Eastern Conference Quarterfinal, getting outscored 9-3 in the process, before reeling off four-consecutive victories to take the series in six games and win their first playoff series in team history.

Okay, so that was 15 years ago, but got to look for positives, somewhere right?

Because the play on the ice through the first two games of the ECF has very much been a negative for the Lightning.

Here’s what went wrong in Game 2:

For the second-straight game, a late-period power-play goal by Washington extended the Capitals lead.

And yet again, the Lighting had no answer for the demoralizing sequence of events.

Tampa Bay started Game 2 much better than Game 1 two nights earlier, despite giving up an unfortunate goal just :28 seconds into the contest when Tom Wilson got an unreal tip on Matt Niskanen’s shot from distance.

The Lightning responded with a flurry and scored twice on the power play to take a 2-1 lead into the second period. Brayden Point got the Bolts on the board at 7:08 after collecting a blocked shot in the slot and firing past Capitals goalie Braden Holtby. Steven Stamkos put the Lightning ahead 2-1 from his office, the one-time laser giving the Bolts their first lead of the series.

But the Caps battled back. Devante Smith-Pelly converted a 2-on-1 rush to tie the game just 2:50 into the second period.

And then came the sequence that sunk the Lightning.

With just over a minute to go in the period, Anton Stralman lost his edge trying to chase down a puck behind the Lightning goal. The resulting breakdown in the Bolts’ coverage left Lars Eller wide open in front of the net for an easy redirect past Andrei Vasilevskiy and a 3-2 Capitals lead.

“That’s a broken play,” Stralman said. “…Stuff like that is part of hockey.”

Then Washington scored the dagger. With 10 seconds remaining in the period, Vasilevskiy was called for an extremely questionable trip on Andre Burakovsky, and the Caps took full advantage. After winning the draw, much like in Game 1, Evgeny Kuznetsov threw a puck in front with the clock almost expired. Vasilevskiy tried to deflect the pass away with Eller there in front to redirect it in again if he didn’t. The puck slipped underneath Vasilevskiy, and Kuznetsov was credited with the goal with three seconds to go in the second period.

With a 4-2 lead and all the momentum heading into the locker room, the Capitals cruised from there.

“The attention to detail again, eight seconds left in the period, you’d think we’d learned from our mistake in Game 1,” Stamkos said. “But they get one, and that’s really a killer going down 4-2 instead of 3-2. It’s little details of the game at this time of year. They’ve executed them, and we haven’t.”

Now, the Bolts are experiencing what it’s like to be on the other end of that scenario.

The Lightning failed to score a 5-on-5 goal in Game 2, both of their tallies coming on the power play. The Bolts have just one 5-on-5 goal so far in the series. Meanwhile, Washington is dominating the play at even strength. The Caps highly-regarded power play converted just once Sunday night, but they scored five more goals at even strength to punish the Bolts.

“We’re a lot one and done,” Lightning head coach Jon Cooper said. “Give them credit, once that first shot gets through it doesn’t seem like we’re getting that second and third chance we’d like. I mean we’re getting a little bit of zone time but either we’re passing when we should shoot or shooting when we should be passing. But, ultimately, we’re turning the puck over too much, something we didn’t do in the first two rounds. When you do that, it’s hard to generate anything because you’ve got guys going one way and now suddenly, they’re coming back at you. That’s been basically our issue.”

Whereas the Bolts were clinical and precise in their even-strength play in the Second Round, they’ve been tentative and a step slow against Washington.

3. LIGHTNING FORECHECK NOWHERE TO BE FOUND
Tampa Bay was able to generate numerous turnovers and keep possession of the puck in the offensive zone for large stretches of the Boston series because of a relentless, tenacious forecheck that got the Bruins out of sorts.

But against Washington, the forecheck hasn’t made an impact in the slightest.

And its absence has left the Lightning scratching their heads through two games in the series.

“They move the puck well,” Stralman said. “They get it out clean from their own zones, and it seems like we can’t really establish our forecheck the way we want to. They’re dangerous, they have a lot of good players defensively and they’re playing with good structure and creating those opportunities.”

Washington has broken the puck out of its own end cleaner in one period (pick any period in the first two games really) than Boston was able to over the final three games of the Second Round.

Credit Washington for studying film and finding a remedy to overcome the Lightning’s forecheck. But the Bolts haven’t been as aggressive in their forecheck either, and that must change soon, or the Lightning will be in serious trouble.

“I think everybody is a little bit hesitant with their decisions for whatever reason, and you can’t play like that at this stage,” Tampa Bay defenseman Ryan McDonagh said. “You’ve got to play on your toes and play with some pace and trust each other out there on the ice.”

Hesitant is not the way to approach an Eastern Conference Final game.

The Lightning have played two hesitant games at home to dig themselves an 0-2 hole.

The Bolts must turn their forecheck loose in Game 3 to shift the tide of the series.

“We’re going to prepare for the toughest game that we’ve played all season,” Stamkos said. “Sometimes adversity is, it’s gut check time. Let’s see who we really are. We haven’t really had to deal with that so far in the playoffs. Now we are. We’ll see what type of team we have.”

For more about the Lightings check this story out.  For Spring Training in Tampa Bay look here.