The American road has been a muse for writers, musicians, film directors, painters, and photographers. Jack Kerouac’s On the Road (1957) and John Steinbeck’s Travels with Charley (1962) are classics in American literature.      Easy Rider (1969), starring Peter Fonda and Dennis Hopper, featured the motorcycle, almost as a protagonist and as a symbol of rebellion. Thelma and Louise (1991), with Susan Sarandon and Geena Davis, the first feminist road movie, attracted a large audience.

Organized by the Aperture Foundation, New York, The Open Road: Photography and the American Road Trip is a visual tour de force. It opens Thursday, February 9, and continues through Sunday, June 4, in the Hazel Hough Wing of the Museum of Fine Arts in St Petersburg.  This exciting exhibition includes approximately 100 photographs that trace the rise of road culture in the United States. It begins with Robert Frank’s extraordinary series The Americans from the mid-1950s and continues to the present day with images by Ryan McGinley and Justine Kurland. Cars, billboards, signs, the landscape, urban and rural areas, motels and restaurants, and, of course, people dominate. 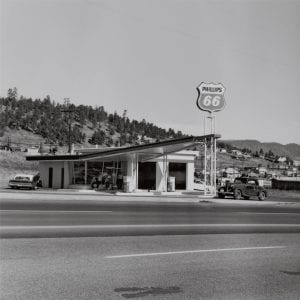 The Open Road in its entirety has a cinematic quality and has three film stills, including one from Alfred Hitchcock’s Psycho, 1960. (Remember the Bates Motel?) There is even a vintage battery-operated toy car (around 1960s/70s) that stops for the passenger to take a photo.  Ed Ruscha’s Twentysix Gasoline Stations, created as an artist’s book, reveals the Modernist imprint on the landscape in the 1960s, and Garry Winogrand’s 1964 captures a country in the throes of change. Lee Friedlander’s American Monument and Stephen Shore’s Uncommon Places revel in turning expectations upside down.

The acclaimed Japanese photographer Shinya Fujiwara in his American Roulette series and Frenchman Bernard Plossu bring the perspective of outsiders to the American experience. Ryan McGinley and Justine Kurland emphasize freedom and experimentation, often by photographing those on the margins of society, including their young friends.   No road trip would be complete without the Sunshine State, reflected in Florida (1967 and 1970) by Joel Meyerowitz and Joel Sternfeld’s Wet’n Wild Aquatic Theme Park, Orlando, Florida, September 1980. Many other leading photographers are represented, including William Eggleston (from his Los Alamos Portfolio), Inge Morath (Road to Reno), and Alex Soth (Sleeping by the Mississippi).  Curated by David Campany and Denise Wolff, The Open Road takes visitors on an unforgettable journey. It is supported in part by the National Endowment for the Arts.

ABOUT THE MUSEUM OF FINE ARTS, ST. PETERSBURG, FLORIDA

The MFA at 255 Beach Drive N.E. has a world-class collection, with works by Monet, Morisot, Rodin, O’Keeffe, Willem de Kooning, and many other great artists. Also displayed are ancient Greek and Roman, Egyptian, Asian, African, pre-Columbian, and Native American art. Selections from the photography collection, one of the largest and finest in the Southeast, are now on view in a gallery dedicated to the medium. Kristen A. Shepherd is the new Executive Director.

Hours are 10 a.m.-5 p.m. Monday-Wednesday, Friday, and Saturday, until 8 p.m. on Thursday, and noon-5 p.m. Sunday. Admission is only $5 after 5 p.m. on Thursday. Regular admission is $17 for adults, $15 for those 65 and older, and $10 for students seven and older, including college students with current I.D. Children under seven and Museum members are admitted free. Groups of 10 or more adults pay only $12 per person and children $4 each with prior reservations. The MFA Café is open from 11 a.m.-3 p.m. Tuesday-Sunday. For more information, please call 727.896.2667 or visit mfastpete.org.

Courtesy of the artist