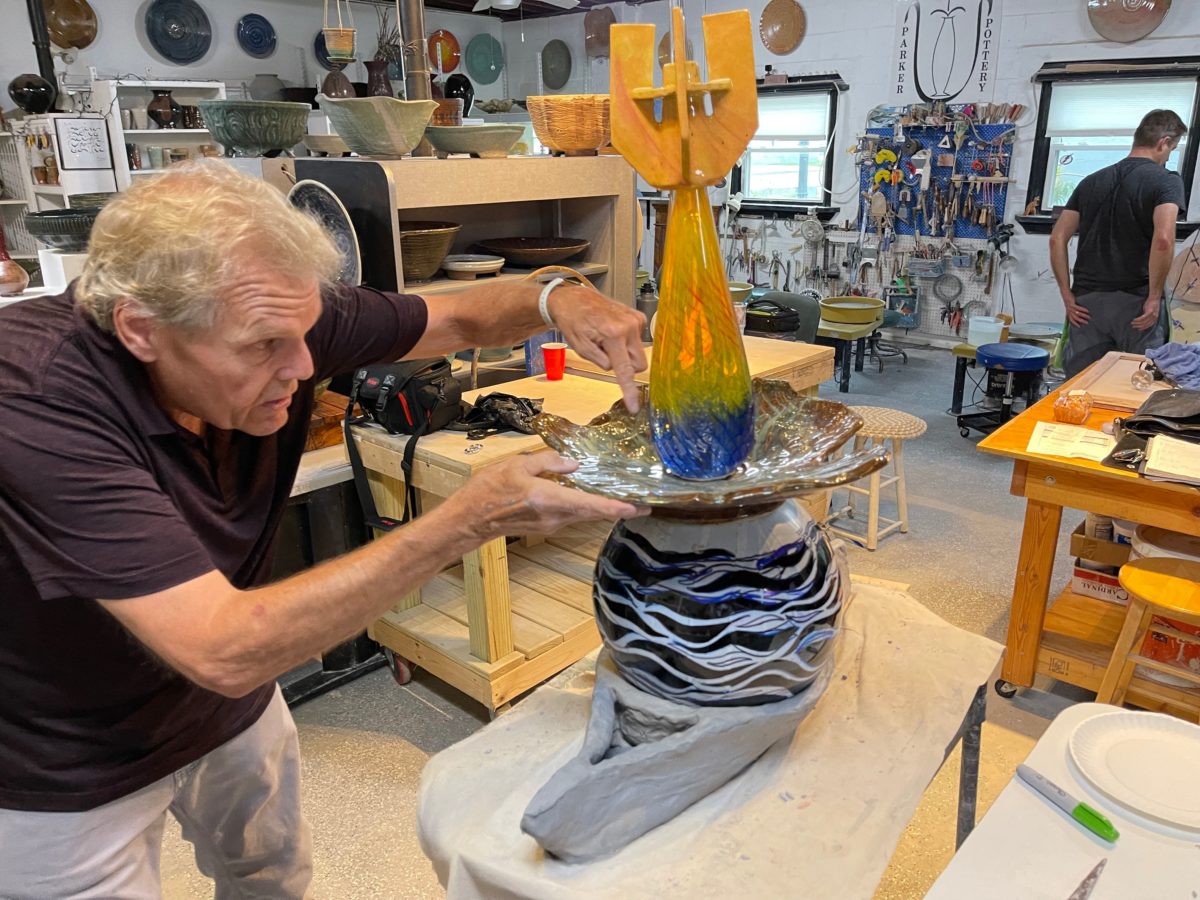 To better get to know your community, meet the local artists who make up its tapestry of art and design. Each month, DESTINATION TAMPA BAY introduces readers to these talented ambassadors in its monthly artist spotlight. Meet a gifted artist who has spent a lifetime infusing joy in his pottery and both encouraging and mentoring other artists to follow their creative calling. The spotlight shines on Charlie Parker.

Charlie Parker has spent a lifetime with hands immersed in clay and a heart invested in his art. At the age of 14, he started working for Minnesota Clay Company part-time as a clay mixer. Within a few years, he was working alongside Warren Westerberg as an apprentice at his Minneapolis pottery gallery. It was here that the young artist expanded his knowledge of clay firing and glaze application.

“I think I was 17 and right out of high school when I did my first art show,” says the Minnesota native. “It was called Above It All and it was in a gallery in Minneapolis on the second floor, hence the name. It was a solo show and from what I remember, it was pretty successful.”

More than twenty years later, Parker and two partners formed St. Petersburg Clay Company, a small studio, gallery, and supply store for ceramics enthusiasts. Those familiar with the more recent St. Pete art scene may recognize the artist’s name from a gallery bearing his name. In 2010, Parker launched Charlie Parker Pottery, a full-service ceramic studio gallery in the Warehouse Arts District of St. Petersburg offering 3,600 square feet of space welcoming artists to attend workshops and classes and to create and showcase their new artwork. Earlier this summer, Parker handed over the keys to trusted friends after making the decision to retire from his role heading up the popular art hot spot, a decision he says was not an easy one to make.

“I am turning 70 in December, and the workload over the last couple of years was getting to me. I didn’t feel I was being a good ambassador of my craft anymore. My art was suffering as was my teaching, and I love to teach. I just didn’t have time to do what I wanted to do,” he says. “My wife and I had talked about selling for over a year and when Bo and Gabriella made their offer, it felt like a win-win. My name would still be there, and I could still work out of the studio. It felt like it was the right decision.”

Parker says at first the transition to retirement was awkward and it took some adjustment to feel comfortable working out of the studio. Over time, it became easier for him to work onsite without running the operation. He also has been able to tackle house projects and has upcoming travel planned with wife Nancy, which he expects will inspire future artwork.

“Inspiration comes in many ways, but nature is my primary inspiration,” he says. “I am really influenced by things I see like the ripples in the sand as a wave pulls back or rolling hills and the colors of a sunset or sunrise.”

Parker’s early work as a clay mixer may have first drawn him to the world of pottery, but after years of exploring the art medium, the process has grown to hold greater meaning each time he begins a new piece. “I love how clay can often dictate what it wants to be. When I’m at the wheel, hours can go by, and I don’t even know it. There is so much pleasure in taking a lump of clay and seeing a big bowl or a bird bath or a planter at the end of the day,” he says. “Even making something like a mug brings me so much pleasure, because it’s such a personal vessel that can be used by myself, as well as others.”

Earlier in 2022, Parker was one of nine Florida artists hand-picked to participate in Clearly Collaborative, a unique, joint art exhibition between Florida CraftArt and Duncan McClellan Gallery which will allow each artist to take part in an art residence alongside master glass artist Duncan McLellan. Final work from those collaborations will go on display in January 2023 curated by David Ramsey. (Click here to read more about the Clearly Collaborative multimedia art project.) “I was honored. What a privilege to be part of this group. I also felt a little overwhelmed, not wanting to let anyone down. I have nothing but respect and admiration for Duncan and David and did not want to disappoint them,” Parker says. “I still sometimes feel I’m not worthy to be in this group but unbelievably proud to be in it.”

Each artist will be working in collaboration with Duncan McClellan, integrating their own art in their preferred medium with one of the glass master’s art pieces. For Parker, making that visit to McClellan’s gallery of available glass work helped shape the direction of his work that will become part of the Clearly Collaborative exhibit.

“Before I visited Duncan’s, I was thinking of making a fountain, but then I walked through his studio and saw some glass that made me think of bombs. I had just returned from Hawaii and it was Pearl Harbor Day, and my mind was running rampant with an idea,” he says. The artist went back to his studio and drew up a rough sketch and returned to share his vision with McClellan to depict the bombing of Pearl Harbor. “If you have ever been to Pearl Harbor, you know it is an emotional experience. I was hoping I could translate that experience in this collaboration. Honestly, my mind was flying with ideas of how I could use Duncan’s glass with my clay,” Parker says.

Over the years as the artist has engaged with the public, he has run into those who make assumptions about artists, and not all of them have been accurate about what life is like for artists. “There are many misconceptions, like we are starving. People can make a good living through the arts,” he says. “Also, we are not one-dimensional. I love my craft, but I have other hobbies and interests, as well. I love sports and used to play a lot of pickleball, basketball and golf. I enjoy bonsai gardening and working on my home.”

Parker often takes part in area art shows and has won various awards for his pottery including awards of merit, an award of excellence, and multiple purchase awards at CraftART, Florida CraftArt’s annual art show. In late January 2023, he will be participating in Art Festival Beth-El, an invitational art show sponsored by Temple Beth-El in St. Petersburg, as well as the Bonsai Societies of Florida Annual Convention in Orlando May 26-28, 2023, which he is especially excited to attend. “I have really grown to love making Bonsai planters, and it has become somewhat of a passion for me,” he says.

Parker recalls one memorable encounter at a Lancaster, PA art show during which Susan Peterson served as judge. According to Parker, Peterson is the voice behind one of the best books ever written about pottery. Her presence at the show was incentive enough for Parker to fly out to the show. He describes their meeting. “When I met her, the first thing she said was ‘I really like your music,’ then she laughed and said I had made a really unique piece that was very well done. I felt like I had just won the lottery,” Parker recalls. “It’s always a pleasure to meet a hero and when they show you recognition, it leaves you speechless.”

Parker still derives joy daily as he continues exploring his art medium of choice. He now has a little extra free time to pursue it and summarizes it best. “Art gives me happiness, satisfaction, purpose, and a reason to start my day. The excitement of creating and finishing a piece of art gives me a sense of purpose.”

For those interested in seeing more of Parker’s work in person, his work can be seen on display at Charlie Pottery Gallery. To learn more about the artist and his work, follow the artist at his Facebook page.