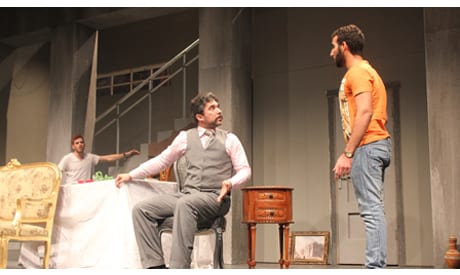 Of New Comedy, The People Downstairs

The People Downstairs, written by Natalie Symons, is taking center stage at American Stage Theatre on select nights from March 11 to April 5. A “pay what you can” performance is scheduled for Wednesday, March 11, and a general admission showing on Thursday, March 12, in preparation for the show’s Gala Opening Night Premiere performance on Friday, March 11, at 8 p.m. The People Downstairs show is American Stage’s mainstage selection from the 21st. century New Play Festival. Symons is the festival’s playwright-in-residence.

The People Downstairs is based In Buffalo, NY, where Miles, an aging funeral home custodian lives with his middle-aged daughter, Mabel, who spends her days writing letters to prison inmates. When a court-appointed guardian threatens to take away their home, Miles sets out to set Mabel up with Todd, an inept mortician. It is a father’s fierce determination not to accept his daughter’s fate that ignites an endearing human comedy about love, loss, loneliness, and the healing power of laughter.

Performances for the People Downstairs are scheduled for Wednesdays through Sundays through April 5. Showtimes vary. American Stage Theatre performs in the Raymond James Theatre, 163 3rd St. N in St. Petersburg. For more information and tickets visit American Stage.org or call the box office at 727-823-PLAY (7529).

Since 1977 American Stage has been dedicated to telling meaningful, compelling stories with integrity and professionalism. As the Tampa Bay area’s longest-running, most critically acclaimed professional theatre company, we seek to bring the power of quality live theatre to each generation in our community.

As they move into their next exciting era, American Stage is committed to be a vital arts leader and contributing to the cultural landscape of the Tampa Bay region as we pursue innovative programming and deeper connections with our patrons and community partners.  Because they believe that live theatre can connect us to our world and to one another, they aspire to make the experience of world-class theatre accessible to all.

American Stage invites you to lean forward and experience the most captivating stories of the moment and the most relevant stories of the past.  All told with passion and a commitment to excellence.

American Stage is a 501(c)(3) not-for-profit, charitable organization and operates under agreement with Actor’s Equity Association, the union for professional actors and stage managers in the United States.

For more broadway shows check out Consider This here.