It’s 50th Anniversary with a proud eye on the past, and a vision for the future that was scarcely imaginable five decades ago. 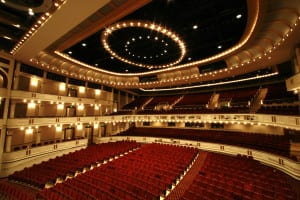 It all began when Ted Mack’s Original Amateur Hour, the American Idol of its day, filmed four episodes in the brand-new Bayfront Center Theater in January, 1965. May’s opening-week events included a production of the black comedy Oh Dad, Poor Dad by University of South Florida thespians. Next door, the massive Bayfront Arena bowed with comedian Jonathan Winters headlining a “Night of Stars” gala.he theater hit its stride in 1966, beginning a stellar run of appearances by top-tier entertainers from every facet of the arts. The great Louis Armstrong played here that first year, and Dame Margot Fonteyn, Britain’s legendary prima ballerina, danced at the Bayfront in ‘73. Illusionists Uri Geller and the Amazing Kreskin dazzled and thrilled, and numerous rock acts – including the Pretenders, Devo and The Knack – made their Bay Area debuts.

In 1987, the theater received a major upgrade, transforming the no-frills ‘60s design into a world-class performing arts center. A significant portion of the $24.5 million renovation was funded by St. Petersburg’s Mahaffey family – and so the Bayfront Center Theater became the Mahaffey Theater.

Not long after the 21st Century dawned, the outdated arena was demolished, and the Mahaffey – now undeniably the jewel in St. Pete’s cultural crown – underwent another major upgrade, to the tune of $22 million. Completed in March 2006, that renovation doubled the lobby space and introduced the Mahaffey’s glass curtain wall and atrium, offering a stunning view of sparkling Tampa Bay. Big3 Entertainment took over management of the theater in 2011, with CEO and Chairman Bill Edwards privately funding an upgrade of the lobby’s décor, and the creation of an ultra-luxe VIP lounge.

From Tony Bennett to the Moody Blues, from symphony orchestras to R&B stars, top marquee names are now performing in the most beautiful, state-of-the-art theater in the Bay area.