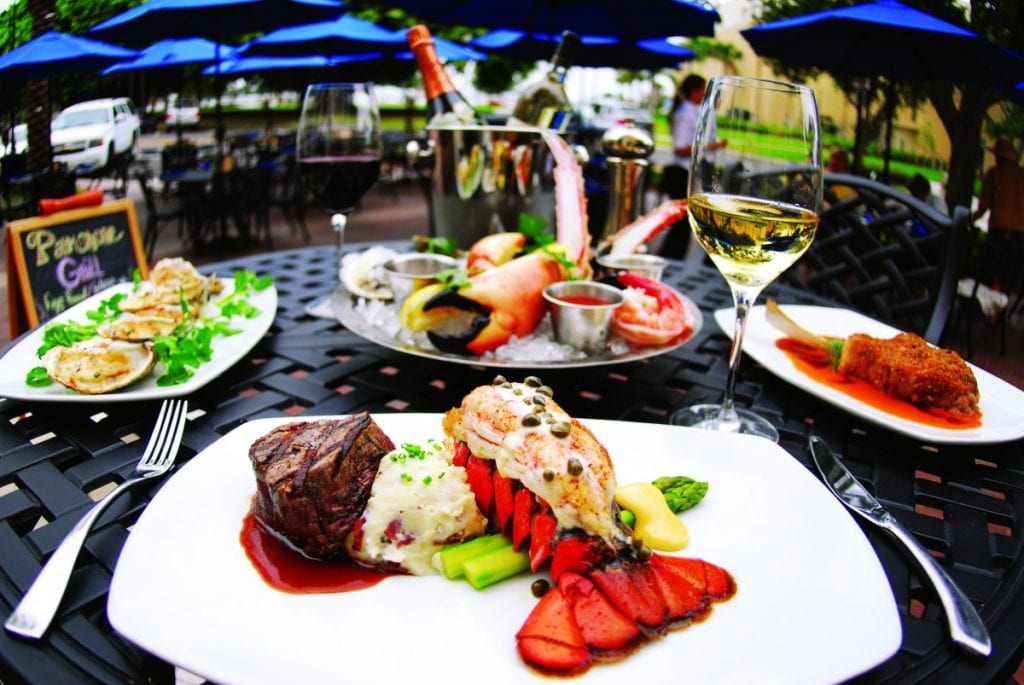 The Tampa Bay area is home to many restaurants that specialize in a variety of cuisines with fresh, local ingredients. If you’re looking for a night out on the town, then look no further than some of these “Best Dining Destinations!”

Key to a restaurant’s success is the quality of the food that is served there. Three of the area’s finest chefs discussed their own personal favorite dishes to give our readers a hint as to why their restaurants are among the area’s “Best Dining Destinations.”

Chef Tyson Grant of the Parkshore Grill in St. Petersburg has been in the restaurant business for 25 years. He was born and raised in St. Petersburg then traveled all around the world to follow his passion of cooking. He returned to his hometown and opened up his own restaurant, the Parkshore Grill, seven years ago with his partner Steve Westphal.

The Parkshore Grill has a wide variety on its menu, but Chef Tyson has picked out two items that make his restaurant a signature stop on anyone’s dining list. The first dish is the 16 oz. Meyer Angus Rib Eye, which is prepared delicately to the diner’s choosing with roasted shallot tarragon butter. Chef Tyson pairs the rib eye with a Meritage from Napa Valley, Calif., by the name of Stag’s Leap Wine Cellars “Hands of Time.” The next dish is the filet mignon and lobster platter named after the restaurant, The Parkshore. Chef Tyson pairs the surf and turf ensemble with a Cabernet Sauvignon from Mount Veeder Winery located in the same region.

For Chef Tony Bruno of The Living Room on Main, cooking ran in his blood. He learned how to roll meatballs at age 5 and cook sauce at age 10 from his mother and grandmother. At 16, he started cooking professionally and worked his way up until he was opening Italian restaurants in South Tampa. Now, he is a chef of an international tapas style restaurant where the food is New American with Italian, Asian, and Latin flair.

The Living Room on Main in Downtown Dunedin is no stranger to variety. Chef Tony picks out the Black and Blue Nachos, which are made with crispy blue corn tortilla chips layered with blackened chicken, jalapenos, corn and tomatoes then smothered with Gouda fondue cheese and finished with Mozzarella, Pepperjack and Provolone cheeses. This rich-in-flavor dish is paired with a Hess Shirtail Creek Vineyard Chardonnay from Monterrey, Calif.

Chef Tony Bruno’s next pick were the Prince Edward Island Mussels Tajine, which are sautéed in a tomato harissa ginger broth then finished with roasted corn and sundried tomatoes. The mussels were paired with a Mionetto Prosecco D.o.c. Treviso from Italy.

Chef Mark Hrycko of the Island Way Grill in Clearwater studied culinary arts in Quebec, Canada, where he was born. Later, before moving to the U.S., Chef Mark was a Sous-Chef at the home of James Blanchard while he was the American ambassador to Canada. Chef Mark has been in Florida for the past 16 years, all the while working as a Sous-Chef in restaurants around the Tampa Bay area before landing his position as Executive Chef at Island Way Grill, which he has had for a decade now.

Chef Mark’s next pick is the 16 oz. Filet Mignon Bone-In, which is hand-cut and wood-fire grilled and paired with wasabi mashed potatoes and shoe-string vegetables. Complement the filet mignon with a Hall Merlot from the same region.

Visit any of the fine quality restaurants included in this issue’s “Best Dining Destinations” section. You can be assured of a delicious meal and a delightful evening.