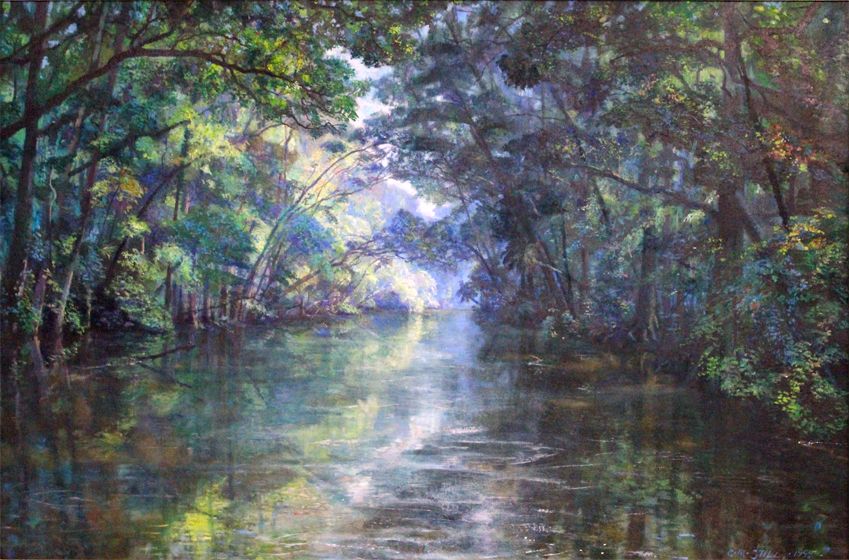 As residents of Tampa Bay, we can become oblivious to the beauty all around us at times, because we are surrounded by natural beauty 24/7 and for 365 days of the year. Our landscape is like a beautiful painting filled with the textures of its rich, sandy shores and lush parks to explore. But the real treasures of Florida lie within the art of local artists who capture the wonders and magic of these bountiful surroundings with oils, acrylics and watercolors. DESTINATION TAMPA BAY spotlights one such artist whose work paints a reflection of this multi-layered, picturesque place we call home, and the rich heritage behind it. The Florida artist spotlight shines on Christopher Still.

When Christopher Still (Left-photo taken by Zack Thomas Photography paints, the artist simply cannot help it: Florida flows from his brush. This native Floridian has been capturing the natural beauty and signature surroundings of his home state for over 40 years. The proof is everywhere – in public arenas such as the Florida House of Representatives or the Governor’s Mansion, in private collections at such prestigious museums as the Smithsonian Institute in Washington, D.C. and John and Mable Ringling Museum of Art in Sarasota, and locally, several commonly frequented places by residents and visitors, including Tampa International Airport, Ruth Eckerd Hall, and St. Petersburg City Hall, just to name a few. He’s been referred to as a Florida Icon and compared to the likes of 19th Century painters Frederic Church and Albert Bierstadt, notable for their own abilities to adeptly capture their surroundings (the American Northeast and Northwest).

Still hails from a family of artists. Born in Clearwater and raised in Dunedin, he grew up greatly influenced by a father who taught history, a mother and grandmother gifted in textile artistry and the paintings of his great-grandmother. He began his art training locally at the Dunedin Fine Art and Cultural Center and took those talents up north by way of a scholarship, attending the Pennsylvania Academy of Fine Arts in Philadelphia. During his time away at college, he was able to explore European art through a travel fellowship that took him to Florence, Italy to study techniques of the old master painters. (Right-The River’s Path by Christopher Stills)

Still has been reflecting the sights and scenes of Florida life and its heritage as an artist ever since, garnering awards for his work including an honorary Doctorate from the Florida State University and induction into the Florida Artists Hall of Fame, with the added milestone of being the youngest artist ever inducted, at age 49 at the time. He is also the Artist in Residence for the Florida Legislature.

Still has been very active in the Tampa Bay community as an artist, getting involved with opportunities to refresh and renovate some well-known places highlighted prominently through public art he creates to capture the history and spirit of the locale. For example, several local resorts feature Still’s work including the Sandpearl Resort and Opal Sands Resort in Clearwater Beach. His involvement in the rebirth of the Belleview Inn (formerly the Biltmore) in Belleair received much attention as he created paintings to line the walls of the elegant lobby and hallways celebrating the hotel’s long and illustrious history. During the December 2018 ribbon-cutting ceremonies of the renovated hotel, Still was in attendance, decked out in top hat and 1890s-era fashion to pay homage to its heritage. “How could someone imagine that in 1897 someone would cut through the wilderness of Florida to build a luxury hotel and that a man would later pick it up, turn it around, move it the length of a football field and so lovingly restore it to its grand beginning?” Still is quoted as quipping at the special grand re-opening. Left-Crystal River Palm by Christopher Still.

Visitors can view Still’s work in commonly frequented public places throughout the Bay area and other Florida locations. Still’s painting “And My Father Before Me” is on display at Ocala’s Appleton Museum of Art. Visitors will find his painting “Changing Tides” at the Tarpon Springs Public Library. South Florida State College Museum of Florida Art and Culture in Avon Park hosts his works “On Sacred Ground” and “Land of Promise.”

Perhaps one of the greatest testaments to Still’s reputation as a trusted creative resource for paying tribute to the history of the state is his thumbprint across many legislative sites throughout Florida. In 1998, the City of St. Pete commissioned him for a painting at the city hall and the Florida Legislature tapped him to paint then-governor Lawton Chiles. That next year, the Florida House of Representatives commissioned Still for a 10-mural series to hang in its chambers to depict the state’s heritage and natural resources. Still completed the series over the next 5 years. Right-In Ages Past, part of Still’s 10-part mural series at the Florida House of Representatives (Tallahassee, FL)

Left: On Sacred Ground by Christopher Still, South Florida Museum of Florida Art and Culture (Avon Park, FL). It’s far too simplistic to call Still a landscape painter. Though he has captured the beauty and richness of Florida’s natural settings and wildlife, he has also depicted its people, their challenges and journey, with the same precision and care. His love for nature extends below sea level as his several underwater paintings demonstrate his skills at capturing marine life and their habitat just as skillfully as their neighboring seabirds and plant life.

Still can be spotted often on location while developing new works. Such was the case recently when the artist posted on his Instagram a photo of himself doing a detail study of pine trees for a new painting for AdventHealth North Pinellas Hospital in Tarpon Springs.

To learn more about this talented local artist who continues to work from his Tarpon Springs studio, visit his website at christopherstill.com. Fans of his work can also connect with the artist on Facebook and Instagram.

All images are for editorial purposes only–all rights reserved. Check out another artist spotlight on Renato Rampolla here.