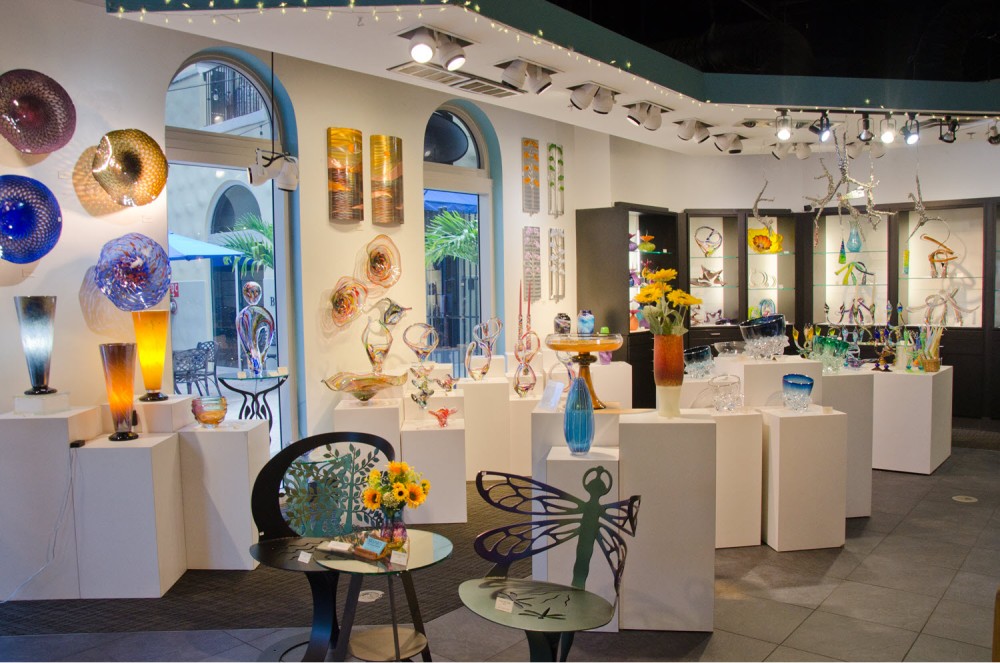 Celebrating Art Is a Family Affair

To better know your community, meet the local artists who make up its tapestry of design. Each month, DESTINATION TAMPA BAY introduces readers to these creative ambassadors in its artist spotlight. This month, we introduce you to an artist who not only inherited a passion and talent for the handmade but has continued to pass on that appreciation to her own children. The spotlight shines on clay and ceramics artist Sue Shapiro.

Some people can simply find inspiration all around them. Artist Sue Shapiro is one of those people. “I am inspired by many things, and I am constantly getting ideas in my mind of things I want to make,” she says. “I’ve always been drawn to geometric patterns. Early on, I was very inspired by Native American Pottery, Aboriginal Arts and African Arts. Later, I became interested in Art Deco Design. I quickly realized that this art style had its roots in the ancient arts and created a more stylized and contemporary look. My early clay work was all about pattern with lots of details.”

Growing up in the suburbs of Boston, Shapiro had a window view of what someone embracing the arts looks like with her father, a commercial artist and technical illustrator who explored woodworking and photography as hobbies. “He recently died but up to age 92, he was still creating art. He was an incredibly talented man,” she says. “Art was part of our lives growing up. I was always drawing or collecting things and making creations.”

Shapiro attended Massachusetts College of Art as she began to work with clay and majored in ceramics. She received her BFA and within two years, was setting up her own clay studio in St. Petersburg. During that time, she began participating in both local and national outdoor art shows and has found clay her art material of choice for the next forty years. “Nature inspires me for my choice of color palette but not necessarily for form. I like hard-edge forms,” she says.

This love of hard-edge forms translates to her passion for architecture which also inspires her. Shapiro is always up for a road trip. “Most people take the bypass around large cities. If I have a choice, I like driving right through the city,” she says. “I especially enjoy it when I’m the co-pilot and I have my camera. I like angles and shadows that are formed on buildings from the many architectural details in the structure.”

Since her years at Massachusetts College of Art, Shapiro has evolved into primarily working with clay as her art medium of choice. She originally imagined herself becoming a painter and then a freshman curriculum requirement to take a clay class changed everything. “I fell in love with the material,” she says. “It is a very responsive material and can be manipulated in so many ways. I consider myself a hand builder, and I work with clay like a woodworker. I roll out slabs of clay cut and join sections together. It is an incredibly quiet process. There is no noisy sanding, drilling, or pounding.”

For Shapiro, art had always been a fixture in her life including the idea of making this passion her career. “I always wanted to be an artist, never really considered anything else,” she says. “I grew up in a house where all the furniture was made by my father, quilts and clothes were made by my mother. I didn’t always like it when I was a kid wishing instead for some ‘store-bought’ stuff, but now looking back, I realize the positive impact it did have on me.”

Like her own family, she has handed down this appreciation and dedication to the arts through a family-owned art gallery. After she and husband Mike set up SMS Pottery in 1982 and continued to show art in galleries and festivals across the United States, the pair launched SHAPIRO’S Gallery in downtown St. Petersburg in 1998 at 538 Central Avenue. It was a small storefront with most of the space allotted for Shapiro to work on her clay projects in the studio. Continuing to take part in national trade shows through the American Craft Council (ACC) helped Shapiro gain some ground and financial stability as an artist in a field that can be unpredictable. “Making a living as an artist is not easy,” she says. “My husband and I hoped that by opening a ‘brick and mortar storefront’ we would gain a little better control of our financial situation. We also had school-age kids, and they needed a bit more normalcy to their lives.”

Shapiro says that those early years at the Central Avenue location taught them a lot, not only about running a business but about managing client relationships, and she’s proud to say that many of those early customers still shop at their gallery today even after moving first to a BayWalk location in 2002 and eventually, their current location at 300 Beach Drive NE which became home in 2009.

Since those moves, the gallery, which carries work by over two hundred American artists, has truly become a family affair. Shapiro’s adult children Matt and Alena hold the reins to guide its path into the future, something the artist never anticipated. “When we first created SHAPIRO’s Studio & Gallery, we never considered that our kids would want anything to do with the business. They both approached us individually expressing interest and offering us what they could bring to strengthen and grow the business,” she says. “I used to do the majority of buying for the Gallery but have turned that role over to Alena. I’m still involved but I defer to her. Mike and my children know that I want to be in the Studio as much as I can and have really freed up my responsibilities in the Gallery. My main job now is that I’m ‘the shipper.’ I know how to safely pack a box.”

Earlier this year, Shapiro was selected as part of a group of nine artists chosen to participate in a unique, joint art collaboration called Clearly Collaborative. The program is an artistic partnership between Florida CraftArt and Duncan McClellan Gallery which provides each artist the opportunity to integrate their preferred art medium with the work of lauded glass artist Duncan McLellan. All nine artists’ final works will be on display as part of a new exhibit at Florida CraftArt to open in January 2023. (Click here to learn more about the Clearly Collaborative multimedia art project.)

I felt honored and incredibly happy to be included. I’ve been a little removed from the local art scene, either busy in my studio or our gallery, and am making more of an effort to get involved in local events,” Shapiro says. “The process of ‘masking’ the glass piece and then sandblasting was all new to me – scary but extremely exciting. When I was at Duncan’s Studio, I was amazed at the freedom he gave me using his equipment. I remember him saying, ‘Sue, you’ve been doing this stuff your entire life, it’s intuitive. Yell, if you need me.’ He was right. It was intuitive. When you use your hands and understand tools, things do feel natural.”

Shapiro created two new works, one in glass, ‘Journey’ and the other in tile, ‘Destinations.’ “I chose one of Duncan’s large vessel forms for my piece. Its title is ‘Journey,’ and I made a companion piece out of clay titled ‘Destination.’ The piece is all about visual enjoyment for me. Beautiful patterns on beautiful forms,” she says.

The artist admits she is drawn to creating personal and practical works. “Lately, I have been making lots of vases. They are unique art forms, but they are also very functional,” Shapiro says. “I also like to make mugs. Mugs are simple yet such a personal object – you hold it in your hands, you touch it with your mouth. It becomes part of your everyday experience.”

Shapiro goes into the new year with plans to take part in local, state, and national shows that pique her interest as an artist. She also enjoys sharing her enthusiasm for the arts with others new to the craft and took part with fifteen other artists in September 2022 at Florida CraftArt for the Artists’ Workbench exhibition during which visitors could watch artists at work as they created fine art and interact with the artists. In January 2023, she will be exhibiting at Art Festival Beth-El as well as the Clearly Collaborative exhibition opening at Florida CraftArt. She also plans to continue working in her studio and put a lot of new work on display and for sale at Shapiro’s Gallery.

I like to get people excited about art and especially to get them to dig their hands in some clay,” she says. “I love when people connect with my work, and I am very happy when I’m in the gallery and get to meet them.”

Story written by Chris Kuhn exclusively for Destination Tampa Bay™.  All photos courtesy of artist Sue Shapiro unless otherwise noted.  All right reserved. Feature image of works on display at the Shapiro Gallery in St. Pete.