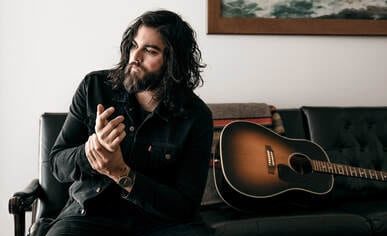 Dan Rodriguez will appear in Concert on outdoor stage with social distancing in place at Safety Harbor Art and Music Center on Friday, Jan. 15. Doors will open at 7, with the show starting at 7:30. Tickets for the limited seating event are priced at $20 in advance or $25 at the door, if available. Rodriguez will be performing on the SHAMc Outdoor Stage, with limited seating due to COVID-19 rules for audience safety.

Tickets for Dan Rodriguez are available online at SHAMC.org or by calling 727-725-4018Audience members are asked to bring their own lawn chairs but not to BYOB. The center’s Bar and restrooms will be open during all performances, and the SHAMc ARTery will be open for shopping as well. SHAMc is located at 706 2nd St North in Safety Harbor.

Dan Rodriguez released his first solo album, “Sojourn of a Burning Sun: last August. It marked his first major release since the breakup of the successful group Elephant Revival two years earlier. He was one of that group’s founders, guitarists, and lead songwriters.

Needing to fill the musical void that might have become following Elephant Revival’s hiatus announcement, Rodriguez immediately headed out on tour as a solo artist, chosen as main support for bands and shared stages with such acts as Jim James, Gregory Alan Isakov, Mandolin Orange, Josh Ritter, Fruition and John Craigie in addition to being added to numerous festivals like Northwest String Summit, Lyons Folk Fest, Jam Cruise and WinterWonderGrass.

Daniel Rodriguez released his debut collection of songs as an EP titled “Your Heart The Stars The Milky Way” on February 15, 2019. His debut full-length album, Sojourn of a Burning Sun, was released August 28th, 2020 on Renew Records.  He also has been working recently on new songs, released individually, that he calls “The Quarantine Sessions,” written while at home during the pandemic quarantines. Some are about that experience and others just created during that “stay at home” experience.

His song, “When you Come Home” was featured in the 2014 Budweiser Super Bowl “Friends Are Waiting” commercial campaign that premiered during the Superbowl. Miller Lite used his single “So Good” in a 2018 commercial during NFL games and more, and in 2019 his song, “You Feel Like Home,” was highlighted in Explore Minnesota Tourism’s newest ad campaign.

Dan Rodriguez describes himself as “a whiskey & beer drinking, fishing & hunting loving, motorcycle riding, quality food eating, hippie sympathizing, people loving, husband & father who lives in Minneapolis and shares a life with my amazing wife and two adorable sons named Oak and Alder. I grew up in the suburbs of Detroit, MI, and moved to Minneapolis when I was 18 to study music, and I stayed because I’m one of those crazy people that enjoys the snow and cold weather.”

His current tour includes the concert in Safety Harbor and a few more appearances in the south, where the weather is quite a bit warmer.  Content provided by SHAMc and Dan Rodriguez. Photos are for editorial purposes only and are subject to copyright.