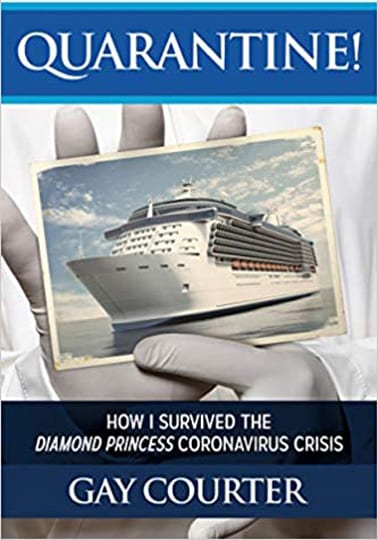 Novelist, nonfiction author, and filmmaker Gay Courter’s latest book is the non-fiction Quarantine! How I survived the Diamond Princess Coronavirus Crisis. In addition to the more than 150 interviews with media outlets from around the globe that Gay and her husband Phil did while under quarantine in Japan and Texas, Gay wrote two op-eds for the Washington Post and an article for The Atlantic. See quarantinediamondprincess.com and gaycourter.com for more about Gay and her previous books. This program is a WebEx virtual session and advanced registration at http://eastlakelibrary.evanced.info/signup/calendar is required to receive the virtual link for the meeting.

Gay Courter has worked continuously as a writer in film, television, fiction, and non-fiction since graduation from Antioch College in 1966. She is the author of five best-selling novels with over three million copies in print.

Gay Courter has served as a volunteer in the Florida Guardian Ad Litem program with an active caseload that includes neglected and abused children since 1989. She has written I Speak For This Child; True Stories of a Child Advocate, a non-fiction book about her work as a children’s advocate, published in February, 1995 and has appeared on Good Morning America, Day One, NBC Weekend Edition, and in Newsweek, the Los Angeles Times, and Christian Science Monitor.

I Speak For This Child was nominated for a Pulitzer Prize, and in 1995 Gay received the Child Advocate of the Year award in Florida for her work as a Guardian Ad Litem, the Sharon Solomon Child Advocate Award from the Florida Center for Children and Youth, and special recognition from the Florida Chapter of American Women in Radio and Television, Inc. for her work on Where’s My Chance? The Case for Our Children, which also won an Emmy. Gay accepted her second Emmy from the National Academy of Arts and Television Sciences, Suncoast Chapter, for a series of public service announcements called Solutions for America’s Children. Altrusa International named her one of 10 Most Admired Women of 1999 for “Making a Difference.” In 2005 she and her husband received a congressional award as “Angels in Adoption.”

The Courters are the proud parents of two sons, Blake and Joshua, and a daughter, Ashley, who was adopted from foster care at age 12. Blake is a graduate in engineering from Princeton University and a specialist in computer-aided design. Joshua, a graduate of Hampshire College, is an ethnographic filmmaker, custom craftsman, and designer.  Ashley graduated from Eckerd College and has a Masters in Social Work from the University of Southern California. She is the author of Three Little Words, her bestselling memoir about her years in foster care and its sequel Three More Words.  She is a professional motivational speaker who educates audiences on foster care and adoption issues.

Gay is a freelance travel writer who travels the world. Read about her trips and travel tips at Escapades With Gay: Travel Blog.