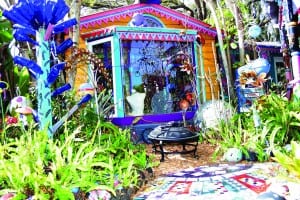 Strangers are roaming through the yard today like they do most days …pointing, smiling, taking snapshots.  Todd and Kiaralinda Ramquist don’t seem to mind, in fact, they greet the elderly snowbirds and encourage them to linger.

“We call it a good day for smileage when we get a few drive-bys who stop and walk around,” says Kiaralinda, who along with husband Todd, has spent the last two decades  lovingly transforming their ordinary brown bungalow and yard into a colorful folk art masterpiece.

The Ramquists welcome the slow drive-bys, the pointing fingers, the strangers with cameras and questions and even the occasional newspaper or television  crew who come to see Whimzey, the name they have dubbed their eclectic Safety Harbor home and art studio. Most of the community, however, know it simply as “the Bowling Ball House’’   because of the painted bowling bowls that line the yard and fill the gardens.

What started 20 years ago with a half-dozen painted bowling balls is now a collection close to a staggering 700, says Todd. Each is unique, painted or decorated by friends, strangers, celebrities and other artists such as the renowned national folk artist Howard Finster. 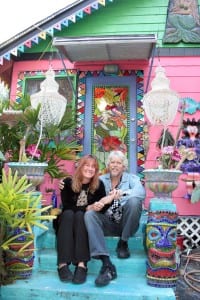 The Bowling Ball Home is a festive meeting place for regional and local artists and musicians, a brilliantly painted gingerbread house of purple and orange and blue and yellow. Color seems to emanate from every direction, from the mosaic tiles that cover the sidewalks,  to a gazebo adorned in  prayer flags and a blue glass bottle garden.  In the middle of it all stands the Bowling Ball Museum, the Ramquist’s personal shrine to the heavy black orb that inspired them years ago..

As the Bowling Ball House became a tourist attraction in the 1980s, the Ramquists realized that they had a higher calling.   “We met so many interesting people who would come from all over that we decided to use our house for fundraising,” says Kiaralinda.

From 1991 to 1999, the Ramquists would create an annual Christmas holiday art display around the house, studio and yard. Enlisting dozens of friends and neighbors, they would create a winter wonderland of lights and folk art.

“We would collect donations for Toys for Tots, MS, Habitat for Humanity, the Red Cross, Katrina survivors and tsunami orphans,” says Todd. In 1999, they wrapped the entire house and gazebo and palm trees and bowling balls in prismatic Mylar and aluminum foil. Dubbed “Shine On,” the gleaming millennium art installation was topped  with  hundreds of twinkling lights, turning it into a media sensation and attracting thousands of visitors.

The massive holiday displays went on hiatus until 2008 when, inspired by a trip to Myanmar (formerly Burma), the Ramquists were moved to create “Peace on Earth – Piece by Piece.”  They solicited organizations, schools and artist communities world-wide to send them hand-made prayer flags. Close to 10,000 flags arrived in every shape and color, scribbled with poetry in foreign languages and symbols from around the world. Thousands came to see the dramatically lit flag-scape surrounding the house, and most all would drop a few dollars in the tin cans marked  “donation.”

“All the donations went to three orphanages in Myanmar,” said Todd. He and Kiaralinda traveled to Myanmar to personally deliver the funds and meet the children, teachers and directors. They have since started a foundation to continue to fund the orphanages.

When not traveling the art festival circuit selling their whimsical art and jewelry, Todd and Kiaralinda continue to support charities and the artist community of Safety Harbor.  Their Pennies for Peace project encourages young children to collect pennies for a fund which goes to a school for girls in Afghanistan. Then there’s the house concerts they hold regularly for struggling musicians,  where a $10 donation gets you a seat in the gazebo (between the bowling balls and prayer flags) and a slice of pizza.

This summer, they are hoping to be awarded some grant money in the Pepsi Challenge charitable donation program, so they can build an art center in downtown Safety Harbor.

“We own a small piece of property that we would like to turn into an art center and music venue,” explains Todd. “It would offer classes and concerts and be a great thing for the community.”

Let’s call that one big strike for Safety Harbor.