For the Love of Art 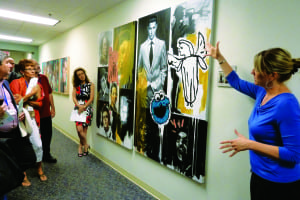 As cultural institutions go, office buildings might not seem a likely candidate. But for the more than 3,300 employees of Raymond James who work at the St. Petersburg headquarters, a typical day at the office means rubbing elbows with bronze sculptures, glass vases and paintings by Peter Max and Andy Warhol.

Behind a sleek exterior, the five high-rise office buildings that make up the Raymond James Feather Sound campus are home to the multi-million-dollar Tom and Mary James/Raymond James Financial Art Collection. Outside, installed throughout the lawns, gardens and parking lots, bronze cowboys and Indian warriors welcome visitors. This extraordinary collection of some 2,400 pieces is one of the largest private art collections in Florida.

Tom James says he began buying art on a whim in the late 1950s during his college days at Harvard University. 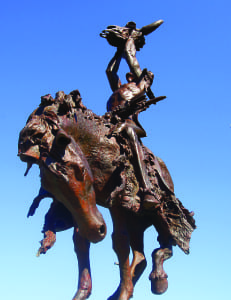 “I started to visit small galleries and bought mostly seascapes and landscapes from New England because I was living there,” he says. “Then I started buying art when I traveled. I had no formal art training, I just knew what I liked.”

At first he bought predominantly American artists, but in the mid-1980s while vacationing in Colorado and New Mexico, James began to collect Western and Southwestern art. “My tastes have evolved over time,” he admits. Now, Western and Southwestern art makes up more than 60 percent of the collection, he says, while wildlife art makes up about 25 percent.

Recently, James has decided to take the next step: he wants to create a museum to house part of his collection. With the combined success of the new Dali Museum, the Chihully Collection, the Morean Arts Center and the Museum of Fine Arts, he likes downtown St. Petersburg as a location.

“I want to take about 400 of my most important pieces and show them,” he says. “ I want to build on the group of museums already downtown, to help make it a destination location. The new Dali’s opening was covered by 50 magazines from around the world. I think we need to capitalize on downtown as a cultural center.”

Tours of the Tom and Mary James/Raymond James Financial Art Collection are available by appointment by contacting curator Emily Shrider at (727) 567-1363.