“Friends of Music” is the name of a successful new membership program at Ruth Eckerd Hall. This invitation-only concert club is open to a limited number of couples in the Tampa Bay area, whose participation helps fund programs at Ruth Eckerd that bring performing arts into the lives of children who would not otherwise experience it.

The “Friends of Music” funding benefits the Marcia P. Hoffman Performing Arts Institute, which gives an opportunity to experience live theatre to more than 100,000 children throughout the Tampa Bay community and which provides some 176,000 hours of arts education in music, theater and dance for these youngsters.

“Together, we are making a difference for the children in our community,” says Lara Shane, director of development for the Ruth Eckerd Foundation. “We are especially pleased to note that two-thirds of the people who are participating in the Friends of Music program are new young families who had not been involved in past years. Friends of Music don’t just enjoy a great concert—they have an intimate, unique experience.”

This new program includes just 18 Founding Members and is limited to an additional 112 “Friends” who have an opportunity to attend three intimate concerts with today’s most relevant artists and bands throughout the year. These concerts are limited to a total of 150 couples and include cocktail and tapas prior to each show, VIP artist experiences with an opportunity to meet the performers (at the artists’ discretion), along with autographs, photographs and question-and-answer sessions during coffee and dessert after the show. 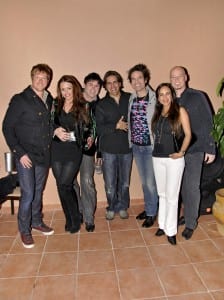 Each of the Founding Members couples has paid $15,000 per year to support Ruth Eckerd Hall and its programs, and they may each invite one guest couple to each concert.  All Founding Members are automatically designated as Circle of Stars members at a Gold level, and they sit a head tables during the pre- and post-concert gatherings.

Friends” must be invited by the Founding Members. They pay $5,000 per year. Membership is partly tax deductible, based on show costs. They also become a part of the Ruth Eckerd Circle of Stars program with membership at the Dress Circle level. There are still a few openings for new members in this program. The Circle of Stars program gives its members an opportunity to purchase tickets in advance for events throughout the year.

The first of the three concerts scheduled for this year took place on April 11 and featured singer and musician Cheryl Crow. The next event took place on August 20 and featured Maroon 5, with Adam Levine and emerging artist V.V. Brown. The third concert has not yet been announced, but the selection of the program will be determined by the Founding Members. Shows range from acoustic to rock-n-roll, whatever is current, cool and contemporary.

To join or to learn more about Friends of Music, interested area residents may contact Lara Shane at 727-946-1346. Detailed information on events, other special membership programs and other activities related to Ruth Eckerd Hall and the Baumgartner Center for Performing Arts may be obtained at www.rutheckerdhall.com.

Other Ruth Eckerd Hall Memberships can cost as little as $60 per year, and members have many special privileges, including early access to tickets for scheduled events throughout the year. Proceeds from memberships and other planned events including four or five planned galas each year help support arts education for area youngsters.

“Some six thousand people are a part of Ruth Eckerd’s non-profit operation,” says Lara Shane. “And I’m proud to say that the money we collect goes to art education and quality performances every one can enjoy  .

The Mask Comes Off