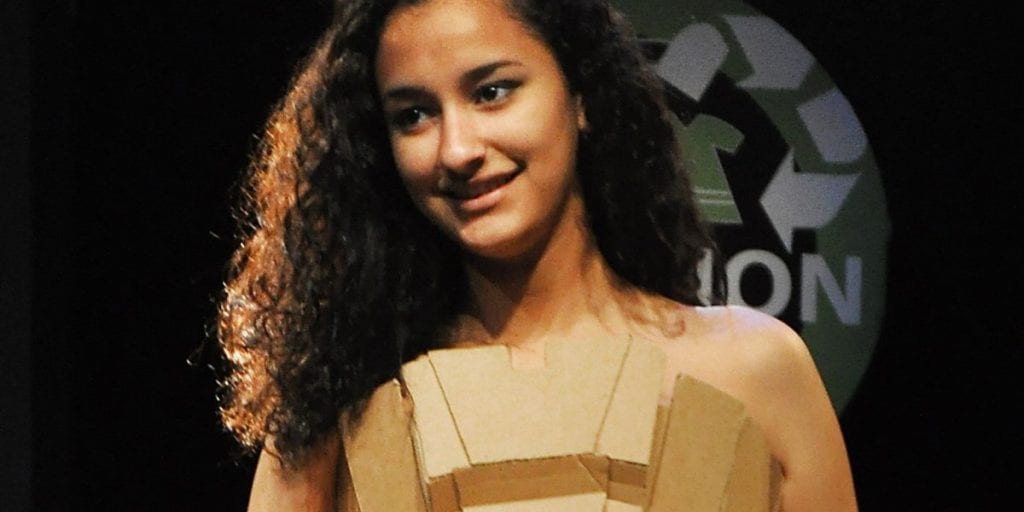 Get Trashed and Save the Planet 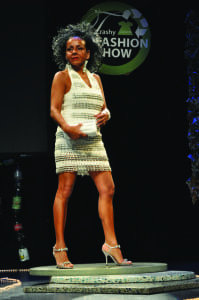 What would you do with 345 granola bar foil wrappers, 18 beer bottle caps, 4 shoe strings, 11 yogurt cup tops, 24 soda can pop tops, 4 pieces of yoga mat, roofing shingles and a coconut?

Why, make a dress, of course! At least that’s what Sandy Holdridge did. 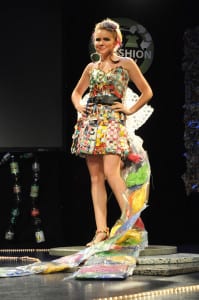 Head to the annual Trashy Fashion Show at the Largo Cultural Center on April 21 where models will be hitting the runway with bold, brilliant designs that make everything old new again. Sponsored by the City of Largo Recycling Department, the whimsical fashion extravaganza will feature some 35 amateur designers ranging from elementary school to teens and adults competing for the prestigious Trashy Trophies.

The highly anticipated fashion event is organized annually by Largo’s Recycling Department to coincide with Earth Day; this year a half-day green expo is being added to the day’s festivities.

“It’s a way of bringing about public awareness, to give incentives for ways to recycle,’” says show organizer and city spokesperson Tanya Fazekas. “These (trashy fashion) shows are being done by recycling departments in cities across the country and they’ve been very well received.” 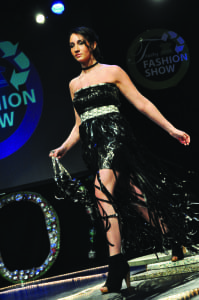 Entries must be made from at least 75 percent recycled materials … and that leaves a lot to the imagination.

Wanda Rosario of Dunedin loves to get trashy. As a three-time contestant in the fashion show, Rosario let her creative juices flow with inspiration collected from the recycle bins at the Holiday Inn Harbourside in Indian Rocks Beach where she worked. Her first show was in 2009.

“We were working on recycling at the hotel and getter our green certification, so when we heard about the fashion show we thought it would be a good way to use the material we were recycling,” she explains. Her first creation was a white evening gown from shredded copier paper. The next year she designed a flowing leafy-green gown made from recycled paper with images of Haiti. In 2011, she entered a snazzy white mini-halter dress made from discarded knitting yarn and 575 soda can tabs. She liked it so much she wore it at her wedding reception in August 2010.

“It’s just amazing how talented some of these contestants are,” says Fazekas. “Most are not designers, they are high school and college students, they are moms, they are people who are just into recycling …  a wide range of people.” 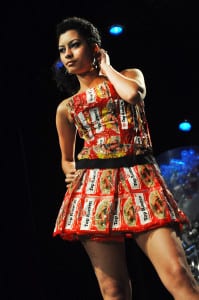 This will be the third show for Melinda Waller, an online coordinator, and librarian Candace Pascual from Everest University in Largo. These trashy ladies, along with help from students, are designing the stage props and trophies using plastic bottles, cardboard and whatever else arrives in the deliveries from Largo Recycling Department.

“It’s an underwater theme this year, so we are creating a coral reef and mermaid,” says Waller. “We really enjoy designing and the students have fun and get creative … We participate because we want to become a positive part of the community, and so the students can be aware of the issue of recycling.”

Fazekas expects a sell-out audience if last year’s standing room only crowd is any indication. Emcees for the evening will be Jerome Ritchey and Holley Sinn, hosts of Studio 10 on WTSP Channel 10. Judges will determine winners in the following categories: Junior (Elementary School), Teen & Tween (Middle School), High-End (High School), Adult Trashion (18 and up).

For a look at last year’s Trashy Fashion Show, go online to www.largorecycles.com

By Marcia Biggs for Destination Tampa Bay magazine.  Pictures by the City of Largo