Chi Chi’s Academy Prepares Students for the Game of Life 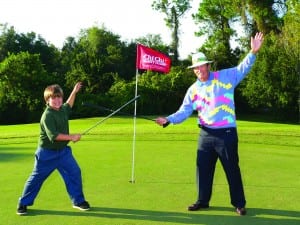 It all started when Chi Chi Rodriguez came to Florida to give a golf clinic to the youngsters at a juvenile detention center at the invitation of Bill Hayes, a concerned teacher, golfer and part-time detention officer. That’s when the pair came up with an idea for helping disadvantaged kids. They enlisted the help of Raymond James Financial, Inc. founder Bob James and created a foundation to start a school that would help kids succeed through golf. Sean Frommé must be just the kid they had in mind.

Sean was referred to the Chi Chi Foundation Academy in fifth grade. The Academy is a Pinellas County Public Partnership School program that operates at Chi Chi’s Golf Course in Clearwater. Until he started at the Academy, Sean had never touched a club, but he got the chance to participate in golf lessons as part of his Physical Education classes there. Golf soon became the incentive that not only kept him in school but also helped him to succeed.

One of the goals of the Chi Chi Academy is to help kids like Sean get a good education and to prepare them to be able to enter their regular high school when they graduate fromeighth grade. Once Sean discovered golf, keeping up with his studies was just a way to be able to get out on the course. For Sean, golf was something he truly loved, and he kept working on his game at every opportunity. He has improved so much that as a sophomore at Palm Harbor University High School, he is a member of the varsity golf team. In fact, this year he posted two consecutive rounds of 69 at Cypress Run in the team qualifying.

Golf was just a part of the big change that Sean underwent while at Chi Chi’s. The other major factor was the interest and support shown by Chi Chi Academy Board member Jessica Majeski. Jessica got her big break through golf, too. She worked as a caddy at the Red Run Golf Club in Royal Oak, Mich. (near Detroit) and won a Chick Evans Scholarship to attend the University of Michigan. The scholarship covered tuition and room and board. She now is a successful Financial Representative for Northwestern Mutual Financial Network. For the past

two or three years, she has been a national co-chair for fundraising from alumni and is the new national President of the Evans Scholar Alumni from the University of Michigan.

Although Jessica was involved in some charitable work in Tampa, she wanted to find something worthwhile to do a bit closer to home. She mentioned this to her friend. St. Petersburg artist T.W. Curtis. Knowing that golf had always been an important part of Jessica’s life, he suggested that she contact Chi Chi’s to find out about volunteer opportunities there.

She was immediately enlisted to serve as co-chairperson of the signature Chi Chi Charity Golf Classic, a role she has held for the last four years. For almost as long she has been a personal mentor for one of the Chi Chi students, none other than Sean Frommé. As their friendship grew, Jessica told Sean how he, too, could get an Evans Scholarship and go to college—maybe even play golf on his college team.

College seems a long way from being a student at Chi Chi’s, but Sean is dedicated to making it happen. He works hard on his studies and his golf game. With Jessica’s support and the support of his parents, he already is planning to work next summer in Michigan as a caddy to qualify for an Evans scholarship.

The transition to high school wasn’t easy for this dedicated young man, who found the change from his Chi Chi’s eighth grade class of 13 students to a freshman class of 750 at Palm Harbor a challenge. Sean’s class was smaller than the 19 in each Chi Chi’s class today because it started shortly after Chi Chi’s Academy added grades 6-8 for middle school students.

“It was a little overwhelming to begin with,” he says. He is taking a full load of college prep classes and even is enrolled in Honors English. He says his favorite subject is math. Jessica has arranged for him to work with a great tutor, Katie MacNeill, a math teacher at nearby East Lake High School, to help him keep his grades up to the standard required for that Evans Scholarship. A highlight for Jessica Majeski as Sean’s mentor came not long ago when Sean texted her that he got an “A” on a Geometry test.

A little of his mentor’s dedication to helping others has rubbed off on Sean. He goes back to Chi Chi’s two or three afternoons a week—“whenever I can get a ride”—to take some of the young students out on the course. He calls Chi Chi’s his home away from home and proudly states that he is the Academy’s “chief volunteer.”

Thanks to the support of his mentor and the Academy that Chi Chi and his friends founded, Sean Frommé has set some pretty impressive goals for a bright future ahead. 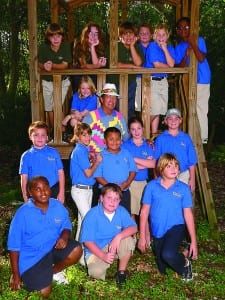 The Chi Chi Academy ‘s education model is made possible by the partnership with the Pinellas County School District.  It is a drop out prevention model with a student teacher ratio of 9:1. The 170 acre campus is a partnership with the City of Clearwater since its inception in 1989.  The Academy  has recently forged partnerships with The First Tee of Clearwater, the Boys and Girls Club of the Suncoast and Big Brothers/Big Sisters, offering programs that drive not only the academic success of students but grow their personal life skills as well.

The Chi Chi Rodriguez Youth Foundation is guided by a volunteer Board of Directors chaired by Tom James.  Board members provide strategic plans for funding and programming of Academy initiatives.  Part of the annual $700,000 education funding comes from the public golf course and the Sports Complex that serve as living classrooms to enhance the school’s hand’s on learning concept. Individuals can support programs by utilizing the golf club and the sports complex or participating in one of its many events.

(If you’d like more information about how you can become a volunteer to help with one of the many programs that take place at Chi Chi’s, call Cary Stiff, Senior Vice President, at 727-726-8829, ext. 202, or email her at [email protected].) To learn more about the Academy, visit the Chi Chi website at www.chichi.org

The Mask Comes Off