History in the Making…and Oldsmar Was Formed

When Ransom Eli Olds came to Florida in the early 1900’s, he already was a successful businessman and inventor.  He had founded the Olds Motor Vehicle Company in 1897 and also owned the REO motor company, manufacturer of the REO Speed Wagon. In case you didn’t notice, that vehicle’s name is based on Olds’ initials.

Olds’ claim to fame in history is that he founded the Olds Motor Vehicle Company in Lansing, Michigan, on August 21, 1897. The company was bought by a copper and lumber magnate named Samuel L. Smith in 1899 and renamed Olds Motor Works. Smith became President while Olds served as  vice president and general manager.

In 1901 R.E. Olds designed the Curved Dash Oldsmobile which sold for $650.00. It was this car, rather than Henry Ford‘s Model T, that was the first mass-produced, low-priced American motor vehicle. Although the factory was destroyed by fire that year, the company still sold over 600 models of the Curved Dash. In 1904 sales were up to 5000 units. The Olds Motor Works was bought by General Motors in 1908. The Oldsmobile brand, after a production run of 107 years, was discontinued by General Motors in 2004.

Oldsmar was first named R.E. Olds-On-The-Bay, a name that was later changed to Oldsmar and then changed again to Tampa Shores. Finally, in 1937, it was changed back to Oldsmar. Because of its strategic location between Tampa and St. Petersburg, Olds determined that the community would grow rapidly.

Olds brought in engineers and surveyors from Boston to design a community patterned after Washington, D.C., with tree-lined boulevards leading from the bay to downtown.  A power plant was constructed to serve parts of Safety Harbor, Dunedin and Clearwater. For its time, the streets were very wide, and he added 20 miles of sidewalk, much of which was buried under a layer of sand in later years. He wanted to build a community for the working people rather than the wealthy and envisioned a city of 100,000. He used the slogan “Oldsmar for Health, Wealth and Happiness.”

His original plans included a golf course and a luxurious hotel on the bay, but neither ever happened. Early industry included a saw mill and a foundry that made cast iron engines for tractors and grove heaters. Farming was the primary industry of the area at that time, and residents enjoyed fishing, oystering and crabbing in the clean waters of the bay.

The town never fulfilled Olds’ dreams despite marketing efforts that included bringing in excursion trains from Detroit and the first regularly scheduled passenger flight that brought prospective buyers to Tampa from St. Petersburg in 1914 and even the construction of a 60-room hotel and even a casino that was located at the end of a 1000-ft. pier into the bay. The community was plagued by the problems of Florida swamp land and palmettos, an effort to drill an oil well that yielded only water and R.E. Olds’ own lack of consideration for the employees he encouraged to move to Florida from his plant in Michigan.

In 1921, the town was devastated by a hurricane that brought the water level up 14 feet above normal. Trees were uprooted and homes destroyed. Some of the oldest homes built in Oldsmar remain on Park Boulevard, while others were moved by barge to St. Petersburg in the 1920’s and 1930’s. 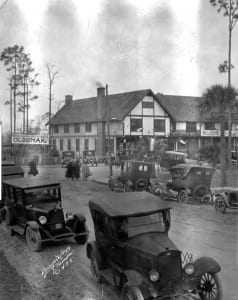 Ransom Eli Olds had over $4.5 million invested in the community by 1923, when he realized that Oldsmar was not growing as rapidly as he had hoped, he began liquidating his assets. He started selling unplatted parcels of land and traded the nearly completed racetrack for the Fort Harrison Hotel in Clearwater. He traded the rest of the land for the Belerive Hotal in Kansas and left the town of Oldsmar after losing nearly three million dollars. The population of Oldsmar was only about 200 when he left.

After a scandal involving land sales by a St. Louis promoter, where he was caught selling underwater lots, the town was renamed Tampa Shores. It wasn’t until 1935 until the last of the property owned by R.E. Olds was finally sold, and two years later the town restored its original name.

When the Gandy Bridge was built in 1924 and the Courtney Campbell Parkway in 1934, traffic between Tampa and St. Petersburg no longer went through Oldsmar, and the lazy town seemed to go to sleep. Only the Tampa Bay Downs racetrack kept things alive. It wasn’t until the 1980’s that Oldsmar was discovered again.

Pinellas County, the most densely populated Florida County, was nearly built out when the Florida population explosion reached the little city, which had increased by only 1100 residences in the 1970’s. With the expansion of Tampa Road to enable better transportation and upgrading of other roads in the area, Its population tripled in the ‘80’s and soon it was growing faster than any other city around Tampa Bay and faster than almost any other Florida city.

City officials recognized the need to provide a better infrastructure, so they built a new $8 million state-of-the-art sewer plant. New upscale housing developments were expected to add 10,000 new residents, but in 1992, almost 1700 acres were sold to Pinellas County for the Brooker Creek Wildlife Preserve, slowing future growth. This parcel is now part of an 8,000-acre preserve north of Oldsmar and a protected environment of forest and wetlands.

By the year 2000, the population had grown to 11,910, and in 2008 it was up to 13,401. Scarcely the 100,000 that R.E. Olds had dreamed of, but a strong and solid growth with attention to protecting the environment and maintaining the quality of life for its residents. There now are several golf courses in the immediate area, and the city is developing a new Town Center in the State Street area to incorporate a sense of community.

Business and industry are thriving in Oldsmar, and the city today—while nothing like R.E. Olds envisioned—epitomizes a small town in Florida that has much to offer for residents and visitors alike. Today it seems to have fulfilled Olds’ slogan—“Oldsmar for Health, Wealth and Happiness.”

Information for this article is based on ”Reflections of Oldsmar, 1996”based on Ransom Eli Olds and the American Dream, contributed by Ann Liebermann, and Modern Oldsmar: Rediscovered at Last, contributed by Paula Geist.