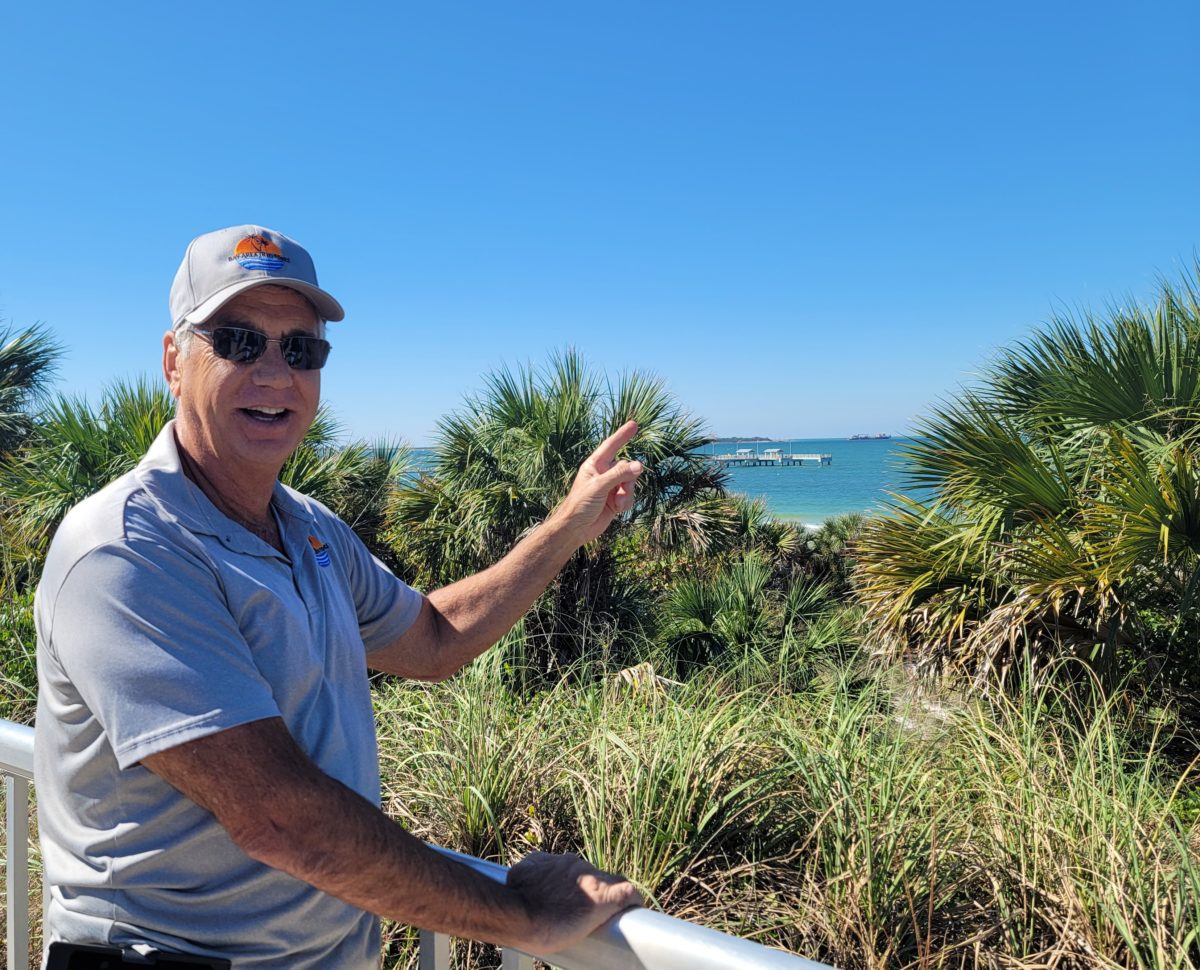 Are you the type that wonders about everything? Curious about all sort of things including why towns and streets are named the way they are? How did Florida get its name and who were the first Indigenous people of Pinellas County? Well, if you are that type of person, you need to explore The Bay area with Bob Marcus of Bay Area Info Tours.

Originally from Chicago, Bob has enjoyed stints as a DJ for two local radio stations (WFLA and 98 Rock) cruise ship director, standup comic, and most recently, publisher of the ubiquitous Florida InfoGuide.

After overseeing most of Info Guide’s daily operations – which blends local advertising with area facts, trivia, and maps – for over 21 years, Marcus started to think about the next chapter in life. He said he considered volunteering at a hospital, becoming a part-time DJ again, and then came his eureka moment. “I love to talk, drive and history. So, then I said, ‘well, why don’t I do what I love to do?” said Marcus. “So, it just all came together.”  He decided to hand off the day-to-day operations to Susan Williams and just like that turned a page in his life.

Already a local history buff, Marcus he began scouring books, videos and anything or anyone that could increase his knowledge of the area. There are always more facts, more tidbits of information to relay and more personalized insights and stories from his 41 years in the area. (Left a visit to Vinoy. Courtesy of the Vinoy for editorial purposes only–all right reserved).

Your tour starts in a 7-passenger luxury minivan; its climate controlled to your settings and has a speaker system, so you never miss a word.

He then sets off to the Don CeSar, focusing on the love story between Thomas Rowe, who opened the hotel in 1928, and his star-crossed love interest, Lucinda. Unfortunately, Rowe couldn’t marry her because of lack of consent by her parents. Much like Romeo and Juliet, the story is a romantic tragedy. Rowe dies of a sudden heart attack right there in the lobby. Many employees claim the ghost of Thomas Rowe roams the hallways. People swear they see him in his white Panama suit and hat, while Lucinda is dressed in her black dress right by the fountain.

That is not the only story on the tour with a hint of the supernatural, all told with the kind of voice that seems made for this narration.

Marcus then heads down palm-lined streets to the historic beach town of Pass-a-Grille, relaying a story about part-time resident August Busch III of Anheuser-Busch fame, or Gussie, as Marcus said the locals called him. Marcus said Busch would host celebrities and buy everyone rounds of Budweiser at the local watering hole, calling him “the first Norm from Cheers.”

It’s kind of like I’m a teacher,” he said. “It’s a great, part-time gig for me, but I think I should have done this years ago – that’s how much I like it.”

The next stop is Fort De Soto, where he leads a walking tour of the state park that provides panoramic views of the pristine beach, Egmont Key lighthouse and an up-close look at the twelve” mortars from 1900. Mid-sentence, he cut himself off to add another detail of Fort De Soto’s history he forgot to mention a few minutes earlier – German U-boats patrolled the area during WWII, just nine miles offshore. He points out that this area (just east of Egmont Key) is the most shark-infested waters in all of Florida.

He then drives to the easternmost part of Fort De Soto. Marcus stops and parks on a stretch of shoreline where passengers gaze at the magnificent view of the Sunshine Skyway Bridge in the distance. Marcus relays the tragic disaster from 1980, when a freighter hit the original bridge, causing a partial collapse that killed thirty-five people.

Marcus then pulls out a binder – filled with copies of old historical photos of the places he describes – to show passengers what the new bridge looks like illuminated with LED lights at night. The picture is recent, with the Skyway awash in yellow and blue in a show of solidarity with the people of Ukraine.

Your journey now takes you to a detailed look at downtown St. Pete that makes the city unique. Charming neighborhoods like Roser Park and the Old Northeast, the three hundred plus murals that dot the landscape, the ten micro-breweries, the Pier, and Beach Drive. He stops by the historic Vinoy hotel to give you the rich history and more ghost stories. Even the tv show Ghost Hunters filmed an episode there. (Left Dunedin Marina courtesy of the city of Dunedin)

While clearly a history enthusiast, Marcus said he appreciates the city’s metamorphosis in recent years. However, he said some of his friends bemoan the recent growth and the precipitous drop in the average age of St. Pete’s residents. “You know what I say to them?” asked Marcus. “It’s progress, and it’s going to happen.

Shortly after that statement, Marcus drives by a small downtown baseball field. There, he said, a softball league called The Kids and Kubs consisting of players seventy-five and older dress in 1920s uniforms and take the diamond. “Some of the guys are actually pretty good – one guy said he was 90 years old and was still playing,” he added.

The expansive and detailed tour ends in Gulfport, a quaint and eclectic town he said still embodies “old Florida.” Marcus explains that the wide grassy medians between several of the town’s roads were once home to trolley tracks, which carried passengers from St. Pete before cars were prevalent. Many locals, he said, have no idea. Surprisingly, Gulfport is not on the Gulf and it’s not a port!

As the tour ended, Marcus said he tries to offer passengers a little bit of everything before interjecting his thought with more trivia from an endless supply. “If there is anything you forgot, he says, or just want to ask me a question, please feel free to call me anytime.” (Right image of Fort Desota Beach coutesy of Pinellas Park and Recreation for editorial purposes all right reserved.

Tours are customizable from one hour to five. There is also a northern Pinellas tour that starts in Clearwater, goes to Safety Harbor, Tarpon Springs, and Dunedin. Bottled water is included along with a souvenir publication filled with exceptional stories of the Bay Area. Tour starts at $25 per person per hour. Kids under six are free. It’s a part history, part mural, part ghost, part brewery, but all fun! (Left- Sunshine Skyway bridge courtesy of Pinellas County)