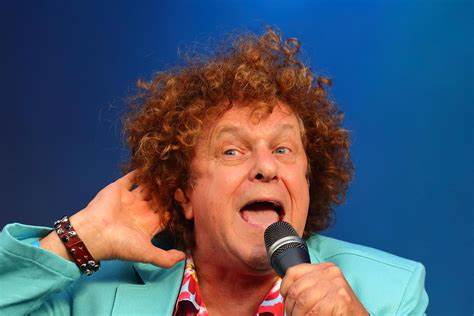 NEW SHOW ADDED! Central Park Performing Arts Center is proud to announce our latest addition to our 2023, March lineup with Leo Sayer and his 50th Anniversary Tour on March 21, 2023, at 7:30 pm. Leo Sayer began his musical career as the leader of the London-based Terraplane Blues Band in the late 1960s. In 1970 he would meet David Courtney, ultimately forming a remarkable creative partnership. Sayer began recording some solo material written with David at Roger Daltrey’s (lead singer of The Who) studio and in 1973, he had his first hit with “The Show Must Go On” which went to number one in the U.K.

The following year he released his first album, Silverbird, followed quickly by Just a Boy, which included two more British hit singles, “One Man Band” and “Long Tall Glasses (I Can Dance),” the latter breaking Sayer into the American Top Ten in early 1975. In 1976, he released Endless Flight, produced in the USA by Richard Perry. This album featured the number one singles “You Make Me Feel Like Dancing” and “When I Need You.” The record became his biggest hit in both the U.S. and the U.K., selling over a million copies in the States. Following this album, Sayer quickly became a fixture on the American Top 40. He began the 80s by releasing the number two hit “More Than I Can Say” and followed that in 1981 with the hit “Living in a Fantasy.” Touring through most of the 80s, he returned to the studio in 1989 to record Cool Touch. He would stay on the road through most of the 90s and, in 2005, while Leo was fulfilling a lifelong ambition to live in Australia, he received a request from DJ Meck to remix his 1977 classic “Thunder In My Heart.” 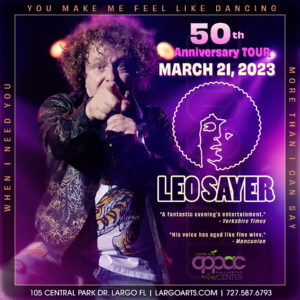 The track became a monster dance hit all over the world and gave Leo his third official number one in the UK. Sayer moved to Australia in 2005, becoming a full citizen in 2008. His new home saw the release of new recordings including Don’t Wait Until Tomorrow in 2008. Over the years he has worked in Australian TV, film ads and radio, while also touring regularly back in Europe. Restless Years, a collection of new material, appeared in 2015, followed by a completely self-recorded album, Selfie, in 2019.   Now, to mark his 50th Anniversary of music making, he released ‘Northern Songs’, his tribute to The Beatles, who have always been one of his greatest influences.

Tickets are on sale now and are available at LargoArts.com or by phone at (727) 587-6793.  A limited number of Preshow Meet and Greet tickets are also available. 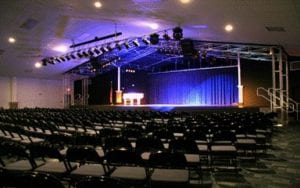 The Central Park Performing Arts Center is a multi-purpose facility featuring a 443-seat theatre, a 200-person grand ballroom and the Historic Largo Feed Store which holds 100. The Center promotes and encourages performing arts among the Tampa Bay community, hosting a variety of national, regional and local artists and groups. Each space is fully equipped to rent for corporate functions, company meetings, receptions and special events. For more information, visit LargoArts.com.

Content and photos courtesy of Central Park Performing Arts for editorial purposes only, all right reserved.