This could potentially be the Bolt’s game of the season here are the game capsules:

After staggering through a pair of games to open the season, Tampa Bay Lightning fans finally got a glimpse of the team’s full potential in an 8-2 victory Saturday night against the Columbus Blue Jackets.

Two less-than-stellar performances at home in a shootout win against Florida and a 4-1 loss to Vancouver, left plenty in the realm of hockey scratching their heads as to just what was going on with the Lightning. The lack of production in the offensive end triggered some changes from Lightning head Jon Cooper, who reunited the vaunted Triplets Line of Nikita Kucherov, Tyler Johnson and Ondrej Palat on Saturday night.

“As coaches you are trying to get players in the best position to succeed,” Cooper said “I liked a lot of what went on [Saturday night]. It was nice to see us get the goals.”

The Triplets Line, which helped propel Tampa to the 2015 Stanley Cup Finals, accounted for four points on the night, including multiple points earned by Kucherov and Johnson.

Braydon Point – after scoring for the first time this season against Vancouver – added two more goals against Columbus. His unassisted tally in the waning minutes of the second period gave Tampa a 4-2 advantage and brought a Columbus comeback effort to a halt after the Blue Jackets scored twice in the period to make it a 3-2 contest.

Tampa – which is tied with New Jersey and Florida for the fewest amount of games played in the league – now has four points on the season. The Bolts will look to improve upon their sixth-place standing in the Atlantic Division this week when they host Carolina on Tuesday night and Detroit on Thursday.  Either game could be the game of the season. 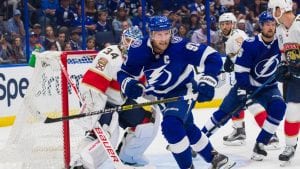 Entering into the game of the season, Who’s Hot: One of its weakest units in the league last year – the penalty kills – has been a strength thus far for Tampa. The Bolts have been short-handed 14 times this season but have not given up a goal when they were down a man, or two. Tampa is the only team yet to surrender a power play goal to an opponent this season…. Tampa has won 10 straight meetings against Detroit, with its last loss to the Red Wings coming in game three of the 2016 NHL Playoffs.

Who’s Not: In three games thus far, captain Steven Stamkos only has one point, that coming in the opening game of the season against Florida. Despite logging nearly 20 minutes of ice time against both Vancouver and Columbus, Stamkos only had four shots in those games – one against Vancouver – and couldn’t find the back of the net with any of those. 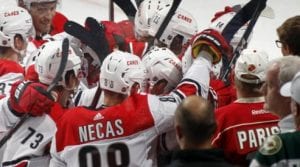 Carolina comes into Tampa on top of the Eastern Conference’s Metropolitan Division after beginning the season with a 4-1-1 record.

Carolina’s Sebastian Aho was named the NHL’s Third Star of the Week last week after he extended his season-opening point streak to six games. In three contests, the 21-year-old Finland native compiled five points (2 goals, 3 assists) with one of those goals coming in overtime.  The winger has 11 points on the season, good for fourth overall in the league.

After dropping their opening game of the season to the Islanders in overtime, Aho and Carolina have rebounded to win four of their last five. The Hurricanes will look to bounce back Tuesday night after suffering a 3-1 loss in Winnipeg their last time out.

About the Red Wings 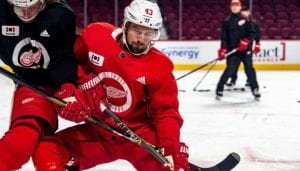 Entering this week, Detroit and Florida were the only winless teams in the NHL. The once-proud Red Wings have seen their team take a nose dive the last couple years after being ousted in the Playoffs by the Lightning in 2016. Detroit has not returned to postseason play since and won only 30 games last season.

Only two Red Wings enter the week with a plus-rating while no one has more than five points in the team’s first five games.

Last year’s leading point getter, Dylan Larkin (16 goals, 47 assists), is on top of the Red Wings points list once again this year. His three goals and two assists lead a roster with eight of the team’s top 10 scorers in their 20s.

Tampa will see the road for the first time this season when it heads out for a five-game stretch in eight days. The Lightning will play back-to-back games against Minnesota and Chicago (Oct. 20 and 21) and Vegas and Phoenix (Oct. 26 and 27) while squeezing in a game against Colorado (Oct. 24) in between those two back-to-back matchups. Tampa returns home on Oct. 30 to square off against New Jersey.

More recent stories on the Lightings.