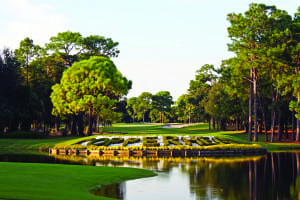 “I fell in love with the place the first time I saw it.”

That’s what Innisbrook’s owner Sheila C. Johnson had to say about her decision to buy one of Florida’s best known resorts in 2007. Located in Palm Harbor, the 900-acre Innisbrook Resort site includes four championship golf courses, including the famed Copperhead Course that has hosted PGA events for many years.

When Sheila Crump Johnson makes up her mind about something, she doesn’t like to take “no” for an answer. That was evident as early as her college years at the University of Illinois in Champaign-Urbana. Chosen to be a cheerleader, she needed special permission from the Dean of the School of Music because no one enrolled in that school had ever been one.

They were concerned that she might injure her hands, the same hands she needed to be able to play the violin as the concert meister (first violinist) with the Illinois State Orchestra. She persuaded the Dean that she could be both a cheerleader and a violinist, and she practiced even harder. Her interest in the University has continued. She serves on the school’s Foundation Board and has endowed two chairs there in the names of her two favorite professors. Her picture is proudly displayed in the Union Building.

“I wanted to be well-rounded,” she says. And she still enjoys an unbelievably wide variety of pursuits. In addition to her Salamander Hospitality properties, Sheila C. Johnson is owner of three major league sports franchises and serves on several boards, including active involvement in CARE, dealing with women’s issues and infectious diseases in Africa, and she represents Black voices for Ariana Huffington’s Huffington Post. 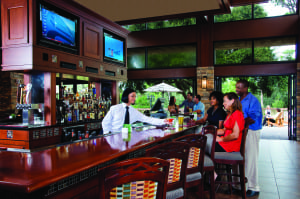 As the owner of Salamander Hospitality, she had been patiently waiting for six years during the permitting and construction of Salamander Resort and Spa, a 168 room ultra-luxury resort on 340 acres in Middleburg, Virginia, which would not be ready for at least another two years. Sheila Johnson was open to the suggestion when a broker told her about the Innisbrook property. The rest is history.

Sheila Johnson recognized that the 40-year-old resort was badly in need of improvements. Her $35 million initial investment would just be a start. She brought in a design team and began a two-year program to rejuvenate the four Larry Packard-designed golf courses and to restore its clubhouses, tennis courts and fitness facilities.

To reassure Innisbrook’s longtime employees, Sheila called a meeting, shook every single employee’s hand and then told them of her plans for the resort’s future. There are now some 5-600 full-time employees on the Innisbrook payroll.

Bulldozers were already out on the golf courses, and construction began right away. It continued at a feverish pace because Sheila Johnson wanted it to be complete when the Pittsburgh Steelers’ owner arrived for Tampa’s Super Bowl XLIII in 2009. The last tree was planted, and the Rooney family found the place in tip top shape. Sheila’s dream had become a reality. 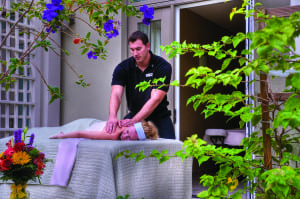 Sheila Johnson’s next step to make Innisbrook into the true luxury destination resort worthy of her Salamander Hospitality group was a luxury spa. It was determined that the former registration building could be completely cleared of its dreary interior and transformed.

“I wanted it to be unique,” she says. “On one of my trips to Africa, I found the perfect name—‘Indaba.’ It means a meeting of minds for health and well being.” Indaba is a South African wine, and today those who visit the spa are offered a sample.

In addition to the South African wine, Sheila C. Johnson has brought other items from Africa for display and sale in the spa. She brought back a plane load of baskets and jewelry from her last trip as a way of helping the African women. Concern over the treatment of women and the AIDS epidemic in Africa continues to be one of her highest priorities. 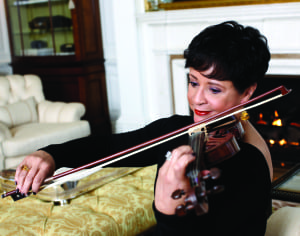 It wasn’t always so easy for Sheila Johnson to spend millions without worry. After graduating from the University of Illinois, she married her college sweetheart, Robert L. Johnson, and they had two children. Robert was working as a lobbyist in Washington when a unique opportunity arose.

He had been representing a company that wanted to start a Senior Citizens Network on cable. When the FCC turned down his client’s request, Robert brought that proposal home to show Sheila, and she suggested that everywhere the words “senior citizen” appeared in the document, they substitute the word “black.”

With no cable channel devoted to black entertainment and issues at that time, their submission was approved. That’s how Black Entertainment Television (BET) was born. Thanks to the help of media mogul John Malone, who put up $500,000 and another $12 million later to pay for the satellite and cable connections, they established BET in 1980. When Viacom bought the network in 1999, the couple received a whopping $3 billion for it. Malone got his money back, and the Johnsons were both suddenly very wealthy.

“The Most Exciting Life Ever”

Her marriage had come to an end, so Sheila C. Johnson embarked on a third life of philanthropy and entrepreneurship. She married Arlington County Circuit Court Chief Judge William T. Newman in 2005.

”He’s a real sweetheart,” she says. “He does some of this with me and says it’s good for him to see what’s going on.”

Sheila travels much of the time and will return to Innisbrook several times this year. Her 87-year-old mother stays in a private condo here during the winter months, and Sheila has completely restored a penthouse in Innisbrook’s Muirfield section with a beautiful view of Copperhead’s 18th green for her family’s use.

How does one person keep up with all the demands of such a busy life? For Sheila C. Johnson, it’s easy.

“I’m doing what I’m doing to have fun,” she says. “It’s thrilling to be the owner and a unique opportunity for me as a woman. Every day is different. I have a great staff helping me, but I have to have hands on throughout the process; I need to know all the moving parts. My thumbprint is on everything…my integrity is on the line, and that’s what’s important to me.”

“Of my three lives, this is the most exciting ever!”