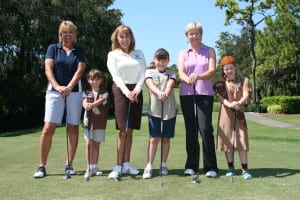 Some of the true “Legends” of women’s professional golf will be out on Innisbrook’s challenging Island Course for the  annual Legends Tour Open Championship. Hall of Famers Nancy Lopez and Pat Bradley have committed to participate.

Defending Champion Rosie Jones will be back from her team’s disappointing loss in the 2011 Solheim Cup completion in Ireland. Rosie won in 2010 with a two-day total of 9-under-par on Innisbrook’s challenging Island Course, five strokes better than runner-up “rookie” Michele Redman. Meg Mallon made her Legends Tour stroke play debut at last year’s event and tied with fifth with Lorie Kane and Beth Daniel.

The star-studded field will include 44 players, all of whom have played on the LPGA tour. Three of them came to Innisbrook in Palm Harbor for a Press Conference earlier this fall. Jane Blalock, Jan Stephenson and Dawn Coe Jones all were available to answer questions about the Legends and about their golf experiences.

Blalock is the CEO and one of the 24 players who founded the Legends Tour. Stephenson won 16 times on the LPGA tour, including three major championships and recently was featured in Australia’s version of the hit TV show, “Dancing with the Stars.” She now resides in Windermere, Fla.

Coe Jones, Canadian golfer who won three times on the LPGA tour and has had five top ten finishes in Legends Tour events in eight starts, also was on hand for the kickoff event. She now is a resident of nearby Tampa Palms community and has been helping coach the golf team at Freedom High School, where her son is a student.

The three talked about the differences between LPGA golf now and back in their playing days, pointing out that there was more camaraderie among players in their time than today when the players have “an entourage” including a golf coach, a golf psychiatrist and several others. They used to help each other and became good friends.

“We still want to compete,” Stephenson said of the opportunities that the Legends tour offers players. “We appreciate sponsors and fans way more now, and we appreciate their support.”

Asked about the changes that today’s new technology brought about, they pointed out that “we could hit shots and work the ball,” adding that “it was different back then and maybe a lot more fun.” The Legends Tour Open Championship will benefit the Girl Scouts of West Central Florida (GSWCF) and is sponsored by Publix and Kraft Foods.

All of the ticket proceeds for the event will be donated to the area Girl Scouts. Representatives of Publix and Kraft were on hand for the event, along with Kim Jowell, CEO of the Girl Scouts of West Florida. This includes nearly 24,000 girls and 10,000 adult members in Citrus, Hernando, Hillsborough, Marion, Pasco, Pinellas and Sumter counties.

Many Legends of the LPGA have been active in Girl Scouts, including Nancy Lopez and Pat Bradley, Legends Tour President Elaine Crosby, its CEO Jane Blalock and Hollis Stacy, who was a Girl Scout in Savannah, Ga., where Girl Scouts was founded in 1912. Its 100 current members include 10 LPGA and World Golf Hall of Game members. They have a combined 650 LPGA Tour victories, including 65 major championships. Since it was founded in 2000, the Legends Tour has helped raise more than $11 million for charity.

First year winner Sherri Steinhauer (also a former Girl Scout) will also return this year. She won with a -3 total. It was her debut appearance on The Legends Tour. Local qualifier Laura Shanahan Rowe held the overnight lead but finished in a tie for third with Cathy Johnston-Forbes in the tour’s first major championship.

During this year’s event, Publix and Kraft Foods are co-titling two new healthy initiative elements on Saturday and Sunday of tournament weekend. The Healthy Living Expo will include a select group of wellness and lifestyle vendors positioned near the Island clubhouse patio. The Birdie Walk is an on-course walk that will lead fans to various checkpoints for vendor samples. Those who complete the walk will arrive at The Legends Tour merchandise tent and receive a free t-shirt. The Expo will be open from 8 a.m. to 4 p.m. Tournament attendees can take from Birdie Walk from 10 a.m. to 2 p.m.

“Our Legends are committed to continued healthy living through the game of golf and in all other aspects of their lives,” Jane Blalock says.

The tournament week will begin on Tuesday, Nov. 8, with an LPGA Golf Clinic for Women. The Inspiring Women’s Reception to honor a woman who embodies the spirit of inspiration will take place on Thursday, Nov. 10. A Pro-Am is scheduled for Friday, Nov. 11, and will be followed by the tournament rounds on Saturday and Sunday, Nov. 12 and 13.

Advance tickets are now available for $20 through GCWCF on line at www.thelegendstour.com/tickets or by calling GSWCF at (813) 262-1785 or (800) 881-1785. Tickets will also be available at the gate. There is no charge for attending the Pro-Am on Friday, but spectators may make donations to the Girl Scouts at the entrance gate. Children 17 and under and all military personnel with ID gain free entrance every day.

Innisbrook Resort, located in Palm Harbor, is operated by Salamander Hotels & Resorts and is owned by Sheila Johnson, who has made the Island Course available for the event. The Island Course is one of the nations’s top 50 resort courses and also as hosted the NCAA championship. The PGA Tour also will be coming to Innisbrook next March, when the resort will host the Transitions Championship on its famed Copperhead Course.