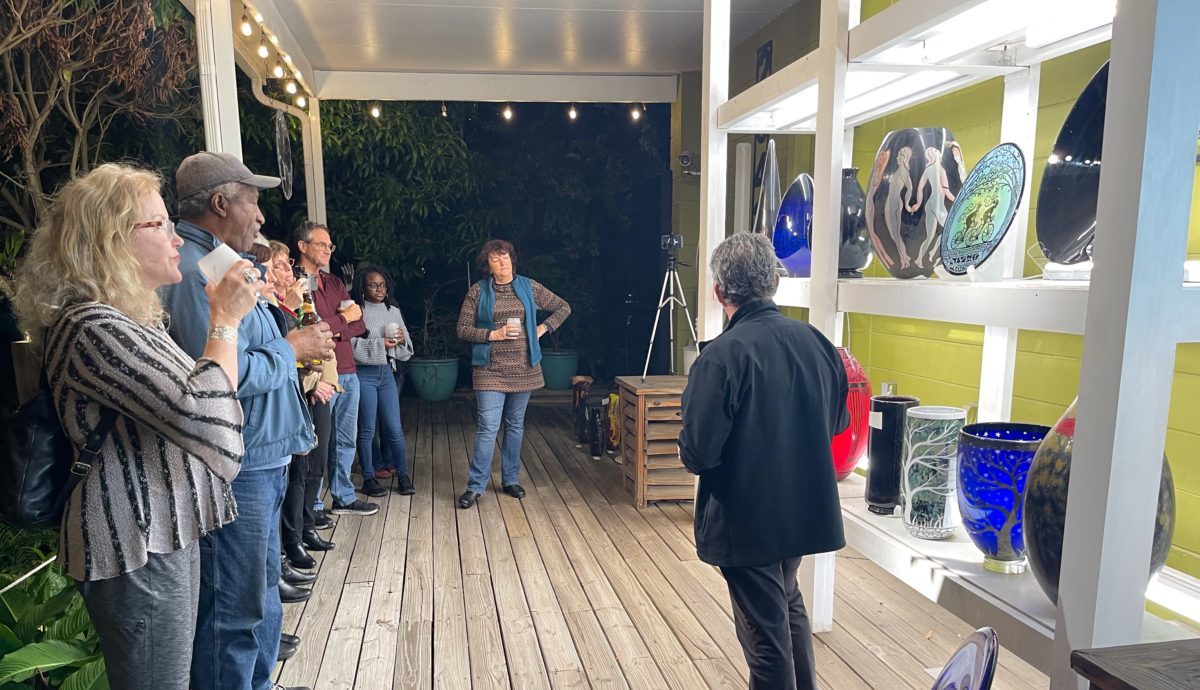 A sculpture of a pair of nesting herons demonstrates the power of bridging two very different art mediums to form one beautiful new work, wherein each art not only balances each other but complements as the sharp, fiery, silver metal is softened by the deep blue, glossy pools of glass. It is the captivating result of collaboration between glass artist Duncan McClellan and the late St. Pete-based metal artist Paul Eppling and and it will serve as an inspiring introduction to a unique art collaboration which finally arrives with a new exhibition hosted by Florida CraftArt in St. Petersburg.

The Clearly Collaborative exhibition is scheduled to run from January 27, 2023, through March 11, 2023. Work will be unveiled for viewing Friday, January 27 at Florida CraftArt located at 501 Central Avenue in St. Petersburg for a special opening night event from 5:30 p.m. to 7:30 p.m. Visitors will get to meet McClellan and the featured artists. McClellan and the exhibition’s curator David Ramsey will talk briefly about the story behind the Clearly Collaborative concept. Admission is free and open to the public.

Ramsey conceived the idea for the Clearly Collaborative and says his expectation for the show was that the selected artists would use their imaginations and talents as they worked with a new medium. “Would their work look similar to their pieces? Maybe, but there was some suspense in which directions they would go,” he says. “Duncan and I had discussed how we thought certain artists would approach working with his glass vessels. In almost every case, the artists took their pieces in different directions than we would have expected.”

Ramsey, McClellan, and Florida CraftArt Chief Executive Officer Katie Deits selected the artists for the collaborative.  “Innovation is part of the artistic process, and this exhibition demonstrates the mind-expanding possibilities of collaboration. Each one of the artists is a master in their field, many often winning best of show awards and whose work is highly sought after by collectors,” says Deits, who also serves as a member of the International Association of Art Critics and is an artist herself, concentrating mainly on sculpture and mixed media. “Each of the artists took on the challenge with great enthusiasm and created fabulous works of art that art lovers and collectors are going to be excited to see.”

Ramsey hopes that attendees of the upcoming exhibition will pay particularly close attention to the details of the artists’ work and leave the show wanting more. “Whenever an artist produces new work, it’s an opportunity for me to add a piece to my collection,” he says. “They spent many hours working on these new pieces, which are different from their normal body of work. As collectors, we need to reward them for their imagination and courage for taking their talents in a new direction.”

DESTINATION TAMPA BAY has been featuring all nine of the selected artists in special spotlight profiles. Click on the name below to learn more about the artist and get a sneak peek of their work to be on display.

Bieler poses with her new work, ‘Sea Foam Symphony,’ which integrates the use of Morse code within her piece to spell out the title of the work as well as messages ‘Protect Our Oceans’ and ‘Ocean Conservancy.’

Curvin completed two works for the Clearly Collaborative exhibit. Her first, ‘Marz Roverz,’ features two colorful canine characters, and the second ‘Searching for Sashimi’ (seen here) comprised of two large papier-mache birds looking for breakfast in a pond. “This has been the most amazing adventure! I’m so grateful they honored me with a role in this project,” Curvin says. “It pushed me to think more broadly about my work and what I might accomplish in the future.”

Fox’s sculpture ‘Connections’ is made of bronze and glass with the glass vases tipped horizontally to offer a unique perspective. “I wanted the materials to have the same story, but with their own unique voice. Inspired by my daily walks in Myakka State Park, I wanted it to have the symmetry and detail that is revealed in nature. I soldered hundreds of pieces of bronze together and gave it a dark patina so that the beautiful red in the glass would just glow.”

For Gilbert, her new Clearly Collaborative piece ‘Annulus’ gave the artist some pause about working with glass since her art medium of choice, metal, is so forgiving and unbreakable. “I had a dream that I picked up the piece of glass and it fell apart in my hands, like soft rotted wood,” she says. “I later decided to use as part of the inspiration for the piece. This sculpture is about time and stress and conditions. It’s about how you feel vs. how you look, chaos vs. calmness and trying to find balance in your life. I based the etching on the glass after annular tree ring patterns and how they vary in thickness year to year depending on the environment the tree encounters. Time may tick along at a steady pace, but it rarely ever feels that way as joyful days can go by in a flash and hard times tend to drudge along. It all makes up a part of us in this strange experience we call life.”

Jones’ Clearly Collaborative work titled ‘And Then There Were Two’ offers both aesthetic beauty and practical functionality. Jones painted the surface of the glass and created a side table with its glass top able to rotate to create a 360-degree view of colorful imagery. “The artwork is self-reflective of transitions, change and identity with a particular focus on the overlap of culture. It explores collages and transparencies to reveal layers of color, organic shapes, and silhouettes,” says Jones. “This piece is reflective of my transition from living in Trinidad to now living and working full time in the United States.” The artist says the glass-top side table features a drum-shaped wooden base to create an inviting space that welcomes two people to sit down and have a conversation.

Kidd has created for the Clearly Collaborative a three-piece set titled ‘Emergo,’ a combination of clay and glass. “Over a hundred pieces go into each finished single sculpture,” Kidd says. “Everything is made out of clay except the final piece at the top which is one of Duncan (McClellan’s) curvy glass finials. The glass seems to emerge out of the clay form!”

Artist John Mascoll stands with his new Clearly Collaborative piece titled ‘Panda’ following sandblasting and glazing. He selected a large, egg-shaped vessel that was entirely black. “My strategy was to create designs on the black surface of the glass, sandblast the entire vessel to leave the designs, and to see what the actual color of the glass looked like. This would allow me to determine how I wanted the finished piece to look like and select the appropriate wood materials for the finial and base,” he says.

Parker’s art piece ‘Pearl’ was inspired by his return from a trip to Hawaii and the emotional experience of his visit to Pearl Harbor. “Before I visited Duncan’s, I was thinking of making a fountain, but then I walked through his studio and saw some glass that made me think of bombs. I had just returned from Hawaii, and it was Pearl Harbor Day, and my mind was running rampant with an idea,” he says. The artist went back to his studio and drew up a rough sketch and returned to share his vision with McClellan to depict the bombing of Pearl Harbor. “If you have ever been to Pearl Harbor, you know it is an emotional experience. I was hoping I could translate that experience in this clearly collaboration.”

Shapiro created two new works one in glass, at left, ‘Journey’ and the other in tile, at right ‘Destinations.’ “I chose one of Duncan’s large vessel forms for my piece. Its title is ‘Journey,’ and I made a companion piece out of clay titled ‘Destination.’ The piece is all about visual enjoyment for me. Beautiful patterns on beautiful forms,” says Shapiro.