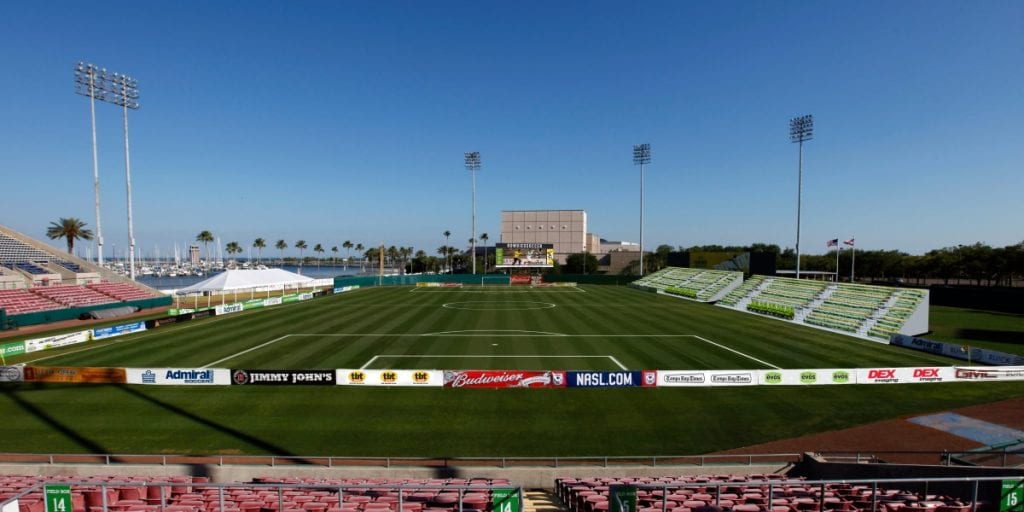 The ghosts of baseball greats Babe Ruth, Lou Gehrig and Stan Musial may be looking down when the NASL Tampa Bay Rowdies open their nine-game Spring soccer season Saturday, April 12, versus FC Edmonton.

Their Al Lang Stadium in downtown St. Petersburg – whose original St. Petersburg Athletic Park site hosted the MLB Boston Braves and New York Yankees from 1923 to 1946 — will boast about 1,100 new premium Midfield seats as the first phase of expansion announced by new Principal Owner Bill Edwards in December. He purchased controlling interest and also is the team representative on the NASL Board of Governors. The stadium was redesigned as a 7,227-seat soccer venue in 2011.

“”When I decided to get involved with the Rowdies, I wanted to create the best team and best fan experience in American soccer,” Edwards tells Destination Tampa Bay. “We are taking steps now to put the best players on the field and add amenities to the stadium that will make an immediate impact!”

After winning the 2012 NASL championship, the Rowdies finished third last year, and with some new key players are looking to get back on top. Included are the signing of 2013 NASL top scorer Brian Shriver, plus re-signing the 2013 NASL MVP Georgi Hristov and star goalkeeper Diego Restropo.

The new construction in the stadium includes the addition of the premium Midfielder’s Club, about 10 feet from the pitch. It will feature 212 seats that wrap around newly integrated players’ benches. In addition, 884 Midfield Reserved seats will be available. All Midfield seat holders will enjoy wider seats, seat backs and more comfortable 36-inch legroom. The 10-inch-rise from row to row allows fans an unobstructed view of the action. Midfield seatholder benefits also include a private entrance and restrooms.

Additionally, premium Midfielder’s Club members will enjoy a Club Badge for access to the exclusive field-level, tented Midfielder’s Club Lounge, with full food and beverage service, including one free beer, wine or soft drink per game;. Midfield Club members will also have a player meet and greet in the Lounge at each game, guaranteed giveaway night items, one Pre-Party before the home opener, and one team technical staff chalk-talk per season.

Midfielder’s Club Memberships are priced at $805 per seat, per season, sold as season tickets only. Midfield Reserved seats are $460 per season. Advance-purchase single game tickets begin at $17, and special seating in the club’s new Midfielder’s Reserved premium section is $40. Interested fans can purchase the new Midfield Seats (both Club and Reserved), and single game tickets, by calling the team office at 1-877-ROWDIES (769-3437) or 813-287-1539, or online at www.rowdiessoccer.com. In addition to the nine-game spring season with five home games, the Rowdies also will play five pre-season games with area soccer teams.

Situated on the downtown St. Petersburg waterfront next to the Salvador Dali Museum and the Mahaffey Theater, the first incarnation of the current Al Lang Stadium, which opened in 1977, was built for the St. Louis Cardinals in 1947. Named for the former Mayor who brought Major League Baseball to the city, it served as home to spring training for the Tampa Bay Rays before they moved to Port Charlotte. Other MLB teams, including the Baltimore Orioles, New York Mets and New York Yankees, have also used the stadium as their spring training headquarters.