On the Road…A Musician’s Journey 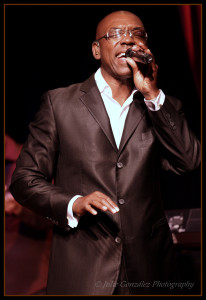 The Destination Tampa Bay family has a new addition. Larry Braggs, lead singer for the last 14 years with Tower of Power (TOP) will join our staff as a writer. His new column, “On the Road…A Musician’s Journey,” will give our readers an opportunity to meet some the people that Larry Meets behind the scenes as he performs on the road, and he hopes to record some interviews and some jam sessions with for videos to place on our website at www.destinationtampabay.com.

Last fall, while he was appearing locally with Tower of Power, Larry was having a back stage conversation with Bonnie Walters, publisher of Destination Tampa Bay when the idea of his writing for the magazine came up .

“I was telling Bonnie how I wanted to start writing about my Journey on the road, and we came up with the idea of me getting involved with this amazing magazine.”

As a contributor to the magazine, Larry plans to bring readers an up close view of the life of musicians from the on the road point of view. He also wants people to get acquainted with the guys who are in the incredible bands behind the superstars, and he will be doing that with video and conversation to show on our website at www.destinationtampabay.com.

Over the winter while he is “On the Road,”, he expects to give us an up close and personal look at some of the best in jazz and R&B, including Marcus Miller, famed bassist and producer; Brian Culbertson, pianist and trombone, and David Sanborn, alto saxist.

Culbertson will release his new album, Another Night Out, in February. Sanborn recently completed Quartette Humaine with Bob James as a tribute to Dave Brubeck and Paul Desmond. James and Sanborn collaborated earlier on their Grammy® Award-winning album, Double Vision.

Larry Braggs has been referred to by Emilio Castillo as “Pound for pound, the baddest cat

.in the land.” A native of Chicago and music graduate of the University of Arkansas in Pine Bluff, Larry has a remarkable vocal range and is featured as the lead vocalist on TOP’s latest album, The Great American Soulbook.”

Despite his successful career, Larry left Tower of Power (TOP) on December 28. He hopes to finish a book of poems, complete a new cd and, most important, to spend more time writing and hanging out with his three sons. He will now be able to choose his opportunities to perform and to spend time with his family.

“I just felt that it was time for me to take on something fresh and new,” he says. “I want to start out on my own and give all the ideas I have in my head a change to come out.”

“I have three sons, and two of them are small boys,” he explains. “I like to spend as much time with them as possible. I like to watch them grow and enjoy being a kid.”

“As a musician, your life is traveling and performing for so many people in all parts of the world,” he says. “So, it’s important that you give everyone you come in contact with your very best. Now. The down side is that a lot of us have families and small kids that depend on us to be home. We are not like most parents where we have 9 to 5 jobs. To put that in perspective, we can’t be home every night for dinner and homework. We miss baseball games and practices, if you know what I mean.”

Talking about the music he enjoys listening to, Larry says, “I am inspired by music that moves me inside. It has to touch my soul and give me something to feel. It has to take me some place else as I listen.”

Some of his favorites are the great singers like Sam Cooke, Otis Redding, Wilson Pickett, Aretha Franklin and Gladys Knight.