The Artist Behind those Wacky Metal Sculptures 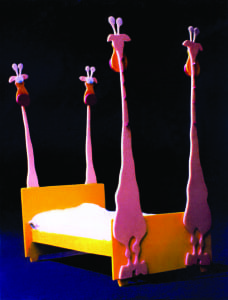 Dino Kotopoulis is a funny man.

He prefers the word “funny,” not whimsical, mind you, because whimsical is just “too cute.” He seeks delight in a stranger’s eye, a smile of approval when he shows her his latest paintings of “square crows,”  his playful steel rocking horse, a metal chair in the shape of a Z that lets the sitter bounce like a baby. The back of the chair is cut in the shape of … hmm, is that his own dancing silhouette? And over there is a sleek wood chair topped with the carved head of a happy-go-lucky woman, hair blowing in the breeze atop her oh-so voluptuous cleavage.

“I call these Egos,” says Kotopoulis. “I do a sketch and put you in a pose that suits your personality. When someone commissions me to create a sculpture, they never know what they’re going to get.”

But you can bet it will put a smile on your face.

“I like to create funny art, things that make you smile,” says the soft-spoken Safety Harbor sculptor, painter and designer. “There’s not enough humor in the world today. We need more humor.”

That’s why he has dubbed his metal sculptures “Funny Metal” and his line of holiday home décor, “Flat & Happy.” Everything he creates has a name, as if he has given birth to a living entity. And in a way, it makes sense as there is a playful personality in each piece from large to small.

Kotopoulis is best known around Safety Harbor for his towering metal yard art and mailboxes depicting animals from howling cats and bumbling moose to birds, butterflies and flowers. His style is a cross between Disney, Picasso and Toulouse-Lautrec, based on vivid cartoons and caricatures he sketches. But few know the depth and talent of the 77-year-old Brooklyn native.

Earlier in his career, Dino Kotopoulis was an award-winning illustrator and animation director, working for top advertising agencies in New York and Chicago such as J. Walter Thompson and Leo Burnett . His characters and logos became part of Americana in everything from television commercials to toys. He won a Clio for his work on Charlie the Tuna commercials and “retired” in 1985 to pursue his own brand designs.

Kotopoulis moved to Pinellas County and started experimenting with wood carving, using his sketches for inspiration. He took up residence in Safety Harbor in 1992, and a year later opened the 20 Toes Studio in Boatyard Village in Clearwater with his life and business partner Peg Sinclair. Boatyard Village closed a year later.

He moved into metal work, creating large-scale pieces for yards and gardens in steel, sheet metal and bronze. His work has been exhibited at fine art galleries around the country and his commissioned work is in homes around the world. In 2004, his “Art Cats” series of metal feline sculptures was shown at the Leepa-Ratner Museum of Art in Tarpon Springs. Each of the cats was inspired by a famous artist, such as “Calder Cat” reminiscent of a Calder hanging mobile, and “Monet Cat” inspired by the French impressionist.

Back to the future

On this humid summer day, Kotopoulis is moving slowly. He strolls around his home and then into the yard, reading glasses perched atop a bald pate, white hair, tank top, loose fitting pants and flip flops – his usual garb.

A few health setbacks in recent years have him moving a little slower, he admits. But artistically, he’s still on his game. He is leaving this weekend for his studio in Seaside, an artist enclave in the Panhandle where he likes to pursue his work for weeks or months at a time.

He stops beside a 13-foot-high metal sculpture of nude women who appear to be frolicking in the sky. “These are my Heavenly Harlots,” he says as way of introduction. His yard is a virtual sculpture garden, filled with an eclectic selection of pieces he has made in the last two decades. His commissioned pieces can take six to eight weeks to complete, he says, and sell upwards up $2,500.

Lately, Kotopoulis is branching out, getting more into home décor … small wall hangings, plates and mugs, ornaments and magnets that are mass produced and sold in gift shops and boutiques across the country. He points out Merry Chris-Moose that sits on his mantle. It’s part of his Flat & Happy collection of holiday home décor for Silvestri by Demdaco (www.demdaco.com).

Then there’s his line of paintings called Squared. They are cute, colorful animals like cats and dogs and cows and sheep with square bodies. A smile alights the stranger’s face.

“These are going to be on greeting cards, children’s clothing, pillows, all kinds of things,” he says proudly.

And that’s a good thing, since after all, it’s all about the fun.