One Family’s Determination Becomes a Legacy of Hope

One Family’s Determination Becomes a Legacy of Hope 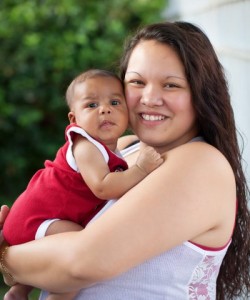 The year was 1979, and a desperate, pregnant young woman called a crisis hotline where college-aged Mary Ann Deeb was volunteering. The young woman told Mary Ann that she wanted to have the baby. Soon after, Mary Ann drove to the pay phone and brought the distraught woman to her family’s home. There was nowhere else for the woman to go.

Mary Ann’s parents, Marilyn and Roy, found local churches willing to assist the woman, but the Deebs realized there were many more who needed help. Roy Deeb became passionate about a solution and, after much work to find the necessary funding, ALPHA House of Pinellas County became a reality.

Now, 34 years later, ALPHA House provides safe, transitional crisis housing for girls and women aged 14 to 41. Since it began, it has been temporary home to more than 3,000 women, teens and babies.

Executive Director Jennifer Stracick walks down narrow hallways, opening doors, describing the program, and turning off an occasional light. “These girls have no families. They don’t have the love and support they need. When there’s a boy showing them attention, they feel loved. They’re not getting the kind of attention from where they should―like from a mom or a dad, and they end up not being educated on the birds and the bees,” she says.

There are two separate areas for transitional residents: 16 rooms for adults and 16 for minors. Each area has two shared bathrooms and laundry areas.

“People always want to buy baby clothes,” she says, but Costco donates all that.” She pauses when asked what the center really needs. “We’re in jeopardy of losing some of our funding, so we’re scrambling to find more money.”

ALPHA House isn’t just a place for mothers to stay before and after their babies are born. Residents are taught positive parenting, and they’re given skills to live healthy, productive lives. They attend school, GED programs, or are placed in internships or jobs. The goal is to help each mother to become self-sufficient.

“I got pregnant in my senior year of high school,” Cesiley says. “I was seventeen, and I didn’t know what I was going to do.”

Even though her situation at home wasn’t always easy, Cesiley had been working toward a better future. She held a part time job, made good grades and planned to go to college.

At almost five months along, Cesiley’s pregnancy started to show. Her step-dad and his girlfriend finally confronted her. Within a month, her stepfather decided to relinquish his parental rights. “He told me I had to leave. A caseworker tried to take me away, but I refused.” The next day, she was removed from school and arrested for being a runaway. “I was six-and-a-half months pregnant.”

Cesiley was taken to ALPHA House and given a small room containing a twin bed, a dresser and a crib. “At first I was terrified,” she says. “The girls seemed so different from me.”

“My counselor, Miss Julie, was wonderful,” Cesiley says. “She is so understanding.” Her baby boy, Jayden, was born in August 2009, one day after Cesiley turned 18. “I decided to stay at ALPHA House a little longer,” she says. “I knew it was the best thing for us.”

But then tragedy struck. In November, at only three months old, Jayden passed away.

Cesiley could barely function. “I couldn’t pay for a headstone,” she says. My family and friends wouldn’t have helped either. Miss Jennifer did a fundraiser. Then she brought me and helped me pick out a headstone. It was $900.”

Now, at 21, Cesiley loves being mom to her second son, who is nine months old. She enjoys her job as an assistant manager in a retail store and still dreams of obtaining a college degree. About a year ago, she started talking to her step-dad again.

“He’s still with his girlfriend. I know they wanted me to be a welfare recipient, but I have a job. I pay my own bills. I have a car. Everything I own is in my name. I don’t need my stepdad’s help. I just need him to be there for my son. Now he is. He loves my son.”

As Cesiley’s baby cries in the background, she takes a moment to attend to his needs. “I don’t want people to feel bad for me,” she says. “I just want them to know my story.”

How You Can Help: