See one of the biggest hitmakers take the stage in this limited run U.S. tour as the former Genesis frontman and successful solo artists takes the stage at AMALIE Arena. Collins will be joined by his longtime guitarist, bassist, keyboardist, percussionist and a 4-piece horns section, as well as son Nicolas on drums.

Collins Still Alive tour will feature hits from throughout his four-decade career, and his concert promoter has even said that fans should expect to hear “Against All Odds,” “Another Day in Paradise,” “I Missed Again,” “Follow You Follow Me,” “In the Air Tonight,” “Invisible Touch” and “Easy Lover.”

His backing band for the run will be the same as last year’s: guitarist Daryl Stuermer, keyboardist Brad Cole, bassist Leland Sklar, percussionist Richie Garcia and his son, Nicolas, on drums. The lineup will also feature a four-piece brass ensemble and backing singers. Prior to last year’s tour, the singer had announced his retirement after a run of 2010 dates but changed his mind a few years later. He performed a couple of songs at his sons’ school, the Miami Country Day School, in 2014 and performed again during a fundraiser for his Little Dreams Foundation.

See Collins Phil LIVE at the AMALIE Arena in Tampa on September 26 at 8 p.m. For more information, click here. 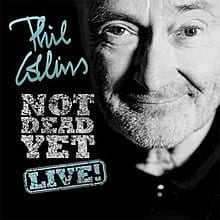