A cardiologist implants a heart defibrillator in a patient. Focus is on the fluoroscopy monitors. (14MP camera, real operation). 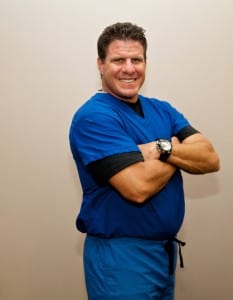 Paul Arnold, MD, FACS, Urology Specialists of West Florida, was born and raised in Miami, Florida. He was always an athletic kid and credits his interest in becoming a doctor due to his early involvement with an orthopedic surgeon.

“I played sports throughout my entire childhood in Miami. I was very accident prone and needed to wear a cast at least eight–nine times. I knew I wanted to become a doctor and thought only about orthopedics because I became very close to my orthopedic surgeon who I saw as a helper. He relieved my pain. I wanted to be able to do that for others.”

“I moved back to Miami and worked as an ER Tech phlebotomist at Baptist Hospital of Miami. It was difficult for me because I always wanted to know more about what was going on with the patient than I was supposed to,” he says. “It was not enough to just draw blood and do what they told me which was basically, ‘mind your own business.’ I kept asking ‘why are you doing this and for what?’ I wanted to understand everything about what was happening to the patient and realized I needed to enroll in med school.”

It wasn’t until after a family friend passed away from prostate cancer, in Dr. Arnold’s third year of medical school, that he began hanging around with a couple of urology residents. It was at that time he cemented his interest in the field of Urology.

Dr. Arnold finished medical school at the University of South Florida in Tampa in 1995 and from 1995-2000 did residencies in Surgery and Urology at The Ohio State University. He did two years in General Surgery and three years in Urology and is Board Certified.

‘”With laser surgery, there is less bleeding, less pain and quicker recovery,” says Dr. Arnold, who now teaches at the USF undergraduate program. “I teach both laser techniques. When patients ask me which laser is better, I say it is up to the doctor performing the procedure – they both are excellent.”

According to Dr. Arnold, one of the reasons he is so passionate for Urology is that his specialty is on the forefront of technology, always on the cutting edge. He cited the da Vinci® robot as being first developed for use on the prostate and kidneys. Later, robotic surgery was used in GYN and other surgeries.

In January 2003, he returned to Florida to Urology Specialists of West Florida in Palm Harbor, a group that has grown to over 20 partners divided into four divisions.

“I am a perfectionist,” says Dr. Arnold. “My concept has always been to change and fix other people’s lives. Being a surgeon fulfills my desire to help a person feel better than they did before.”

It requires great stamina to be able to stand to do surgery for hours at a time, but Dr. Arnold says, “Time stands still when I am operating. I don’t get tired until after it is over. I am trained to move quickly, following all protocols.”

He is dedicated to sports and coached his son’s baseball team up until high school. Dr. Arnold has a new sport now, one which helps build the stamina he needs for his work. He participates in triathlons and is an avid bike rider. He recently won his first ½ Ironman in the Clydesdale division.

Dr. Arnold has won many awards for flag football and was inducted into the Collegiate Flag Football Hall of Fame. He credits his experience as quarterback helping him develop the skills necessary to create surgical teams. “Organization makes everyone excel in his or her best skill.”

He serves as the Chief of Staff at Florida Hospital North Pinellas Hospital in Tarpon Springs. The urology group of which he is a part, USWF Urology, now covers all of Pinellas, and parts of Hillsborough and Pasco County.

Dr. Arnold and his wife Mary Jo have three children- a 15 year old son, and two daughters, 14 and 9.