There’s a great deal of civic pride in the Safety Harbor Public Art Committee. As they review art submitted by local artists for display in City Hall and at the Safety Harbor Public Library and proposals for public art projects to be funded in part by the city, members become more and more aware of the wealth of artistic talent that is found in their city.

Zoran Peshich, new chairman of the Committee and a professional artist himself, came here from England with his American wife, and is delighted with his new home. Not all of the committee members are artists, but all are interested in the beauty of the community, Zoran says. The other members of the committee are The other members of the Public Art Committee are Karen Baker, Kathleen Fessenbecker, Scott Long, Susan Burkhard and Megan Willoughby. Shannon Schafer, the city’s recreation superintendent, is their liaison, and Cathy Benson, City Clerk is their contact with the City Council.

At their meetings, the Committee will be open to requests from artists to have works on display on the Library’s Gallery walls and 10 easels located throughout the Library and in the main reception area of City Hall, Zoran says. Some 3-D art is also exhibited in cupboards provided for the purpose. While most of the art on display in both of these places is available for purchase, the display areas are quite professional.

The Committee also will consider projects that are submitted for approval and potential city support. They work with local businesses to get funding to beautify the city, and the city provides matching funds for some of these projects. Some of the artists who propose projects already have some private support before they present them to the committee.

“We try to get a community feel for whether projects are what we need,” Zoran says. “There are a number of projects now being done—murals and 3D (sculptures). And we encourage our local artists to participate in Artists Row on Third Friday.” 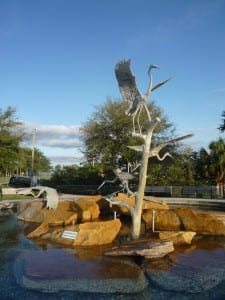 The City has a number of major Public Art projects for citizens and visitors to see. Two major projects are the mosaic sculpture under the Baranoff Tree, and the Sea Bird sculpture and fountain down by the marina. Unlike some other Public Art Committees in major cities and the public art committee that governs art at Tampa International Airport, the Safety Harbor Public Art Committee is “not looking to spend thousands” but it is looking to its own local artists to add beauty for people to appreciate and enjoy.

All of the meetings of the Public Arts Committee are held in the large meeting room at the Library, and they are open to the public, he says. There has only been one meeting since Zoran was appointed committee chair by the City Commission, but he is looking forward to future meetings that will be held on the first Thursday of each month.

Zoran Pesich, who specializes in painting Fantasy and Surreal Art, also has been involved in doing two public art projects himself. Both of his murals went through the same selection process that he now helps to coordinate.

His first mural is at Fire Station no. 53 on McMullen-Booth Road, and he personally did the mural at his own expense as a thank you to the firemen and paramedics at the station who he says “were wonderful in my hour of need.” The firemen came to the aid of his ailing mother, and he simply wanted to show his appreciation to them for their kindness.

Zoran’s other mural in Safety Harbor can be seen at the Safety Harbor Public Library. It spreads across an entire wall in the Children’s Library. This one was funded by the Friends of the Library through the Public Arts Committee. Its giant oak tree spreads welcoming branches to the children who come there to read and for the regularly scheduled Story Time programs. At the base of the tree are some of the classic children’s books that children love to read.

“The oak tree represents the beautiful Baranoff Oak that is in front of the library. Its sheltering branches offer a safe, yet symbolic view,” Zoran says.

Zoral explained that the Public Art Committee wants to support projects like the Sidewalk Chalk Art Festival because it brings in artists from other places to share their talent.The members of the Public Art Committee joined forces themselves during the recent Sidewalk Chalk Art Festival in Safety Harbor to create a prize-winning display of Local History during the Victorian Era from 1880 to 1920. They depicted a post card written in 1917 that showed the old Bath House, children on the beach, fishermen and Odet Phillippe, who planted Florida’s first grapefruit tree.

The message on the postcard read, “Welcome to Safety Harbor. Having a Wonderful Time.”  The postcard’s 1917 date happens to coincide with the official renaming of the city from its former name of Green Springs. Like all of the beautiful sidewalk chalk art that was created during the Festival on March 27 and 28, what was lovely on a sunny Saturday was all washed away by the heavy rain on Sunday.