Rising to the Occasion

The Mahaffey deserves a standing ovation for Titanic: The Artifact Exhibition

When the RMS Titanic struck an iceberg and sank in the murky depths of the North Atlantic on April 15, 1912, the tragedy soon rocked the world. Throughout the past century, the fascination with Titanic’s story still resonates with the public.

In a tribute to the 100th anniversary of the ship’s sinking, The Mahaffey at the Progress Energy Center for the Arts is hosting Titanic: The Artifact Exhibition. Presenting an artifact exhibition may seem unusual for a performing arts center, but the second-floor space works splendidly.

Many of the nearly 125 artifacts on display are personal belongings of the 2,228 passengers aboard the ill-fated ship. Yes, you will see ship stuff such as a porthole, china, and furnishings, but the strength of this exhibit is in the compelling human stories of the Titanic told through personal items recovered and their accompanying photo-bio displays. 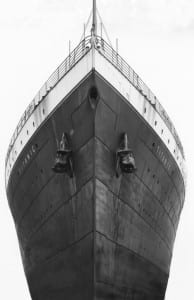 The excellent layout and design of the galleries and attention to details such as dim lighting, props, sound effects and period music make for a total immersion in the story of the Titanic. Adding to the experience are the hauntingly real “passengers and crew” who roam the galleries, from the kindly Capt. Edward J. Smith to the Unsinkable Molly Brown. Dressed in vintage garb, these actors bring the stories of the Titanic’s voyage to life … and ultimately death.

Visitors are quickly drawn back in time to 1912 when they enter the exhibit space, as each receives a replicated boarding pass of an actual passenger on board Titanic. They then begin a chronological journey through the life of Titanic.

The first Discovery/Recovery Gallery begins the journey in present day through 3-D and interactive touch-screen displays showing videos and images from the most recent dive to Titanic, “Expedition 2010.”

For shipwreck fans, this gallery is fascinating. In the summer of 2010, RMS Titanic, Inc. completed its eighth expedition of the wreck site. The mission objectives were to use the most recent technology, including sonar, 3D and HD imaging, to map the entire Titanic wreck site and to document her current condition.

The interactive displays include components from The Titanic Mapping Project™, which shows the exact locations of artifacts recovered from the wreck site, creating a scatter pattern on the ocean floor; video footage explaining in detail how Expedition 2010 came to fruition; and the technological breakthroughs that guided the expedition (ROV and AUV vehicles and cameras). 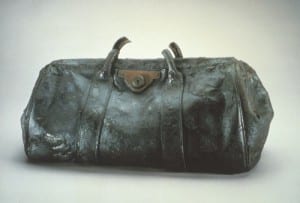 In the next gallery, visitors are again transported back in time to the shipyards of Harland and Wolfe in Belfast, Ireland, and the story of Titanic’s design and construction. RMS Titanic was the largest ship of its day with a length of 882.8 feet. It took three years and over 15,000 workers to construct her, including over 3,000 carpenters, engineers, electricians, plumbers, painters, interior designers and craftsmen. Vintage photographs and mesmerizing silent movie clips edited into a time-lapse sequence show the construction from beginning to end.

The opulence of Titanic was to be unrivaled, and furnishings for all three classes of passengers were extraordinary. Life on board is presented through re-creations of the cabins for first and third class passengers and photo murals of well appointed salons and dining rooms, the Turkish bath and promenade deck. Passenger stories and belongings such as cuff links, jewelry boxes, and perfume bottles are highlighted in this gallery.

Finally, in the Memorial Gallery, more personal artifacts are on display, including a man’s wool suit, suspenders and socks in nearly perfect condition. Here, visitors discover the fate of the passengers corresponding to the boarding pass they receive at the beginning of the exhibition. As they look on the Memorial Wall displaying the names of all of the passengers and crew aboard Titanic, they learn whether they lived or perished. Don’t be surprised if you feel an inkling of joy or sadness. (Although the person named on my boarding pass survived, I did find a crew member with my last name who died – an odd twist of fate.)

Much more than simply artifacts, this Titanic exhibit leaves the visitor with a profound sense of the human connection to the ship and the 1,225 lost souls. For a preview of Titanic: The Artifact Exhibition, the public can view a photo display along The Mahaffey’s second floor balcony.