As Florida’s only true natural mineral springs spa, Safety Harbor Resort and Spa is a “destination” in itself. Visitors from the surrounding area, across the nations and even around the world come to Safety Harbor to visit this unique location and benefit from the health-giving waters of Espiritu Santo Springs, “where healing waters flow.”

The history of those springs dates back some two thousand years to the time when the Indian shell mound builders inhabited the area, followed by the Tocobaga Indians and then the Seminoles. These early residents attributed mystical powers to the springs.

In 1539, Spanish explorer Hernando De Soto reached the shores of what is now Old Tampa Bay and discovered the mineral springs. He believed he had discovered the legendary “Fountain of Youth” and established a camp here. It was De Soto who gave the springs their name.

The first non-native settler to live permanently in the area was Count Odet Phillippe, a maker of Cuban cigars in Tampa and the man who introduced the grapefruit to the state of Florida in 1823. Selected to both the Cigar and the Citrus Halls of Fame, Phillippe moved to Safety Harbor in 1842. His remains are buried in the park that was established by Pinellas County on 122 acres of his plantation adjoining the Spa. A Tocobaga Indian mound located in the park is a National Historic Landmark, known as the Safety Harbor site.

Through the years, a number of owners have acquired the mineral springs. In the 1850’s, Colonel William J. Bailey purchased the springs and the surrounding land from the government and became the first owner of the springs after the United States bought Florida from Spain. Col. Bailey, who had been stationed in the area during the Second Seminole War, called the land “Bailey by the Sea.”

Visitors and local residents had other names for the natural springs, one of which was “Green Springs,” based on folklore about a crippled farmer, Jesse Green, who was able to “throw away his crutches and resume plowing his fields” after a year spent taking the waters.

Through those early years, the springs attracted many visitors to the area, and in the early 1900’s Safety Harbor became known as the “Health Giving City.” The legendary curative powers of the springs soon attracted health-conscious travelers, while locals and visitors helped themselves to the springs. In fact, the springs inspired an international business, and five-gallon jugs of the curative waters were bottled and shipped around the world. 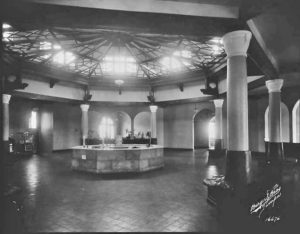 The “Great Florida Land Boom” of the early 1920’s led to Captain James F. Tucker and his wife purchasing the mineral springs and undeveloped surrounding lands. They formed the Espiritu Santo Springs Corporation and began to develop the springs area in the eastern section of Safety Harbor. They erected The Safety Harbor Sanitorium on the land and constructed two pavilion buildings to replace the wooden Water Tower Pavilion and other structures destroyed by a 1921 hurricane.

Across the street, they build the Espiritu Santo Springs Hotal (later known as the St. James and today as the Harbor House), providing overnight lodging for those traveling to the sanitorium to “take the waters.”

The Tuckers sold the springs and sanitorium for back taxes in 1936 to Dr. and Mrs. Alben Jansik, who restored the resort and built a 45 ft. by 95 ft. swimming pool through which 8,000 gallons of spring water flowed daily. It became “a Florida haven for those in search of health, recreation and rest.” Wealthy American families and celebrities like the Great Houdini and department store founders F.W. Grant and Russ Kresge were among those who came to visit.

The real birth of what is now Safety Harbor Resort and Spa dates to 1945, when Dr. Salem H. Baranoff purchased the property. This Naturopathic Medicine pioneer had a vision of creating a true Health Spa, with on site accommodations to house overnight visitors.

With a dedication to naturopathic medicine and the therapeutic properties of mineral water, Dr. Baranoff joined with two other physicians to turn the resort into a modern-day wellness retreat, offering massages, mineral and steam baths, healthy foods and hot packs.

It was under Dr. Baranoff’s leadership that “The Safety Harbor Spa” became an international phenomenon, attracting people to enjoy the curative powers of the waters but also for simple relaxation and pursuit of wellness through a healthy diet and exercise.“Snowbirds” came for the entire winter season to “take the waters” and immerse themselves in a healthy regimen. And sports athletes soon discovered the benefits of using the Spa as a training camp. 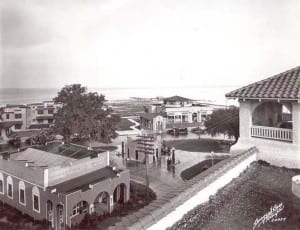 By the early 1960’s, it was apparent that the Safety Harbor Spa was more than just another health spa. Its historic significance was recognized in 1964 by the U.S. Department of the Interior and designated as an historical landmark. In 1997 it became a Florida Heritage Landmark.

In 2004, after a lackluster period in which the Spa was not able to compete with numerous new Florida attractions and beautiful white beaches that were not conducive to creating a consciousness of healthy living, a new owner came to Safety Harbor Resort and Spa.

The Olympia Development Group of Dunedin, Florida, purchased the property and created a new concept for this historic location. Under Olympia’s ownership and with William Touloumis’ leadership and vision, a far-reaching plan calls for generating new interest in Safety Harbor Resort and Spa as a destination spa retreat, conference facility and center for wellness.

Through a multi-million dollar renovation of the property, encompassing the 150-room hotel, a retail shopping promenade and residences on the expansive waterfront land surrounding the Spa, Olympia Development is working to once again create a destination retreat in Safety Harbor.

Guest rooms are being renovated, and most of them still offer a delightful view of the quiet waters of Tampa Bay that have given Safety Harbor its name. It is apparent that the mystery and enchantment of this place, “where healing waters flow,” will continue to endure and attract travelers and locals alike to the Safety Harbor Spa mineral springs.