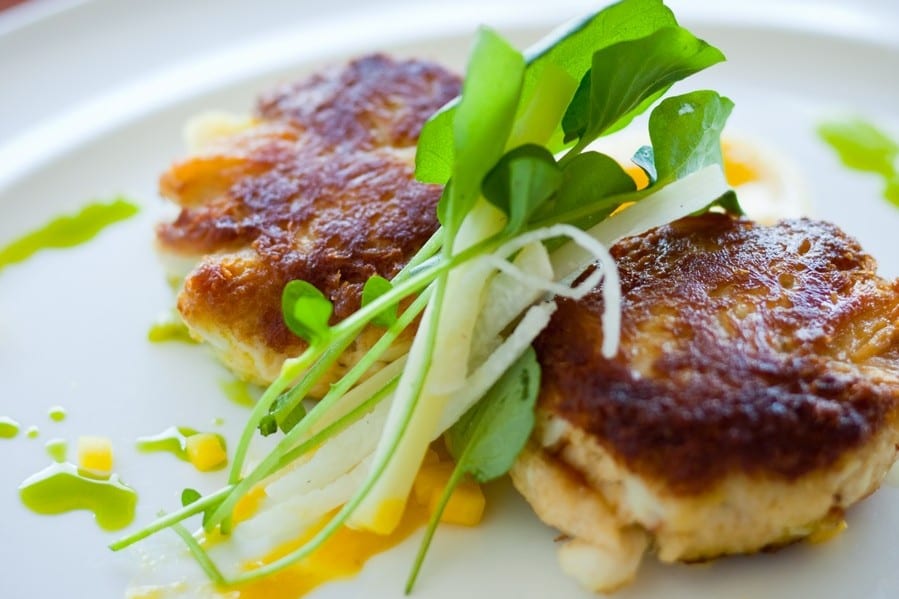 The Hyatt Regency Clearwater Beach Resort and Spa is a recognizable force on Clearwater Beach with its pool deck on the eighth floor and pink façade. What you may not recognize it for is its Coastal American restaurant, SHOR American Seafood Grill.

Open since February 2010, SHOR has been the main dining attraction at the Hyatt Regency since the hotel was debuted four years ago. Executive Chef Richard Preston creates the menu based on local and organic ingredients that he finds in Florida.

“We keep our sources as close to the hotel as possible so we’re not damaging the environment with a carbon footprint,” Richard says. The Executive Chef says that the ingredients that are available from the Gulf Coast often influence the menu, and even the different seasons we experience in Florida can play a role.

“If we don’t get the food from Florida, then we do a lot of research to see where it is from,” SHOR’s Executive Chef says.

Richard recommends guests try the Lobster Ravioli, which is made fresh daily in-house. All of the ingredients, from the pasta shells to the filling inside, are made at the restaurant. However, he says his personal favorite is the Filet with Bacon and Barley Risotto.

Richard, a Canadian chef with two decades of culinary experience, started at Stage West Theatre Restaurant, a dinner theatre in Calgary, Alberta, whose menu would change with each new production. He took the job to earn some extra money. As he worked more, Richard developed a passion for cooking after he was captivated by the craft.

“The really strong chefs looked like rockstars, and people were mesmerized by them,” Richard says. “They just made it look so easy.”

At home, Richard loves to stew food with Southeast Asian influences. He compares it to the hearty winter food of Canada but with more spice. At work, he loves to cook food that makes people go “wow!”

SHOR American Seafood Grill is open daily, including all major holidays. Every night, there is a different special, which is created by one of the chefs.

“Each team member has the opportunity to make a special,” Jose Perez, Director of Food and Beverage at Hyatt, says. “The evening’s special is our number one seller!”

You can see SHOR Restaurant’s cuisine when they participate at popular local events, such as Clearwater Beach Restaurant Week and Dine Tampa Bay, to grow a local following in the community. Visit www.shorgrill.com or www.clearwaterbeach.hyatt.com for more information!