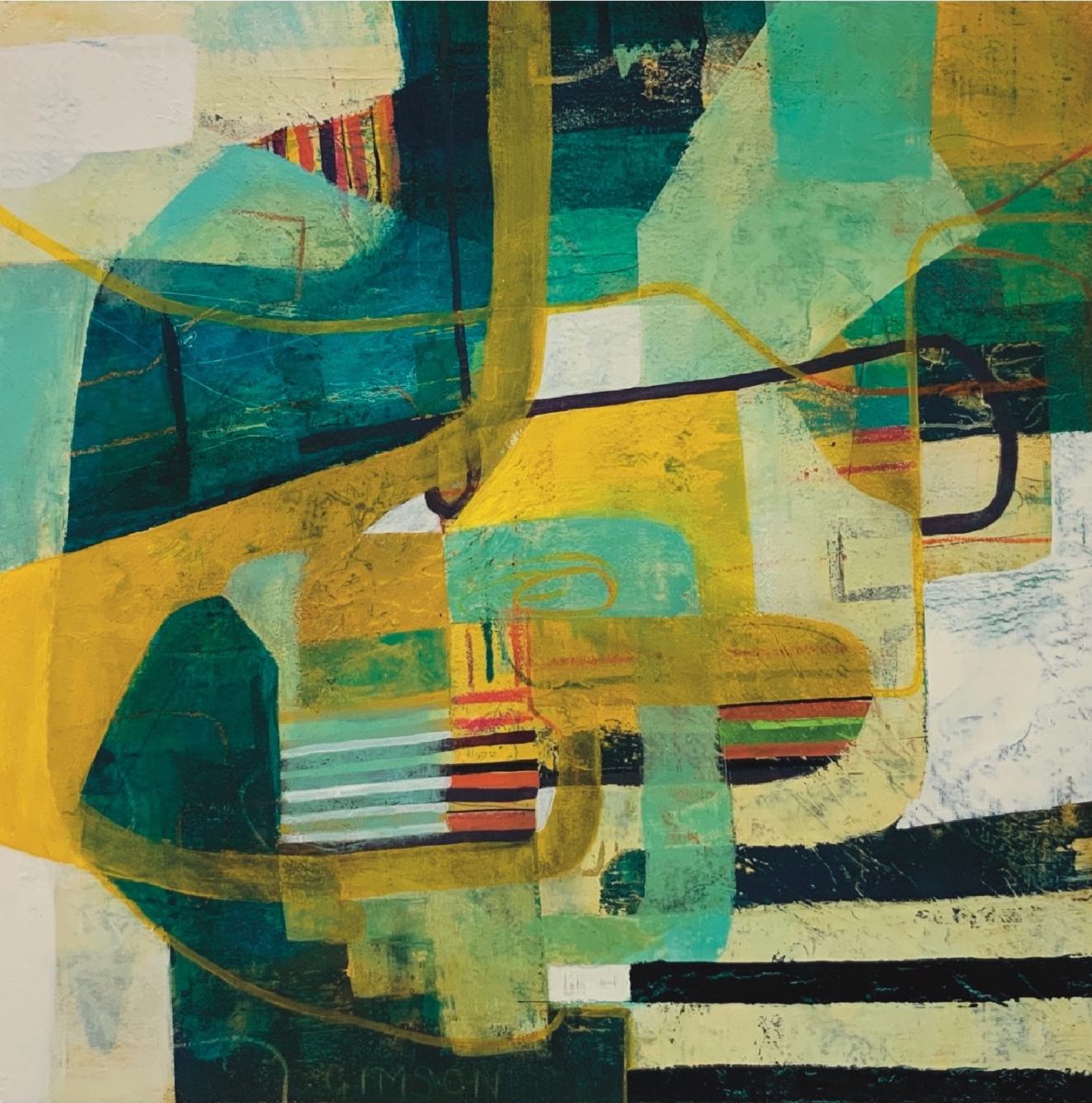 After closing for a summer redo, Soft Water Gallery (formerly Soft Water Studios) reopens this September with a freshened space and two exciting new shows: One of the shows will include Blue Nudes III by Carrie Jadus.  The other exhibit also at the gallery is “In the Abstract” by Kenneth Charles Lichtenberger and Steph Gimson.

The third iteration of intimately scaled, signature nudes by celebrated local artist Carrie Jadus (b. 1976), “Blue Nudes III”, opens with an artist’s reception Thursday, September 8 from 6-9. Attendees are encouraged to dress in blue, and blue-tinted champagne will be served. The exhibition continues through October 1.

What originally began as a way to utilize paint left on her palette after a larger project has since taken on a life of its own. Jadus’ last such series debuted in 2018, and collectors have been patiently nudging her for more. The vigorous, active brush strokes and warm, fleshy hues with which Jadus captures her models contrast starkly with the disarmingly cool backgrounds they float against. The intensity of the blue and the near-absence of context coupled with perhaps the oldest of artistic subjects—the human form—fuses traditional and contemporary to create paintings that are current, yet virtually timeless.

A Bay Area native, Jadus expressed an interest in art at a young age and attended the Pinellas County Center for the Arts at Gibbs High School where she honed her skills in a variety of media. After graduating, a trip to Europe introduced Jadus to the impressionist masters, whose work left quite an impression indeed.

In a practical twist, Jadus earned a degree in electrical engineering, and though the work it afforded her was a stable and reliable for many years, it ultimately proved unsatisfying, and she abandoned it in pursuit of a full-time career as a fine artist. Through diligent dedication to her craft, Jadus has found great success in a field that, in many ways, comes naturally to her. Her work can be found in collections both locally and across the globe. (All images above are of Jadus’s artwork that is on display.

In the Abstract – Nonrepresentational paintings by Steph Gimson; sculptures by Kenneth Charles Lichtenberger

”In the Abstract” features largely nonrepresentational works by Steph Gimson and Kenneth Charles Lichtenberger (LEFT). It opens Saturday, September 10 in conjunction with ArtWalk and continues through November 5.

An intensive, evolutionary layering process is at the core of Steph Gimson’s paintings. Paint may be built up and sanded down; incised with an awl; collage elements may be added. There’s a sort of dialog between she and the canvas; each stage in a way dictating the next direction the piece will take. Sometimes there is a subtle symbology at play, but oftentimes not. It is artwork born of feeling and intuition. For all its apparent freedom, the work has a calculated element to it. It is complex, yet balanced, with colors, values and textural elements in measured agreement. The artist herself is highly organized, the paint tubes in her studio arranged as if for sale in an art supply store. Chaos has no place here.

Born in Hong Kong to British parents, Gimson has always been a creative at heart. As a young woman living in London, she embarked on a high-flying career as a globe-trotting makeup artist to the glitterati, prepping the likes of David Bowie and the British royal family for media appearances and red-carpet events. Painting was there, but it lived in the margins of her spare time. But little by little, skin and cosmetics lost more and more ground to canvas and paint. She still does make up for the odd Hollywood event here and there, but fine art, with its absence of external dictates, has won out as her primary career. (RIGHT-Abstract Artwork by Steph Gimson)

Known professionally as Kenneth Charles (b. 1968, New York), Kenneth Charles Lichtenberger’s  modernist abstract sculptures in metal, clay and cast stone are explorations in geometry. With a designer’s eye, his focus is on balance, tension, fluidity. An analog kind of guy, Kenneth Charles eschews computer-aided design in favor of a traditional, hands-on process that begins with a simple sketch. The sketch is then refined into a maquette, which allows him to analyze how the idea moves in space and informs further refinements. Once he is satisfied with the results, the final work commences. (Left Kenneth Charles Lichtenberger’s  modernist abstract/0.

Kenneth Charles began his career as a commercial artist, but shortly thereafter computers crept in, prompting him to make his exit. In 2009 he began his exploration of sculptural media, starting with clay and casting processes and adding metal fabrication to his repertoire in 2019.

Admission is free and open to the public.