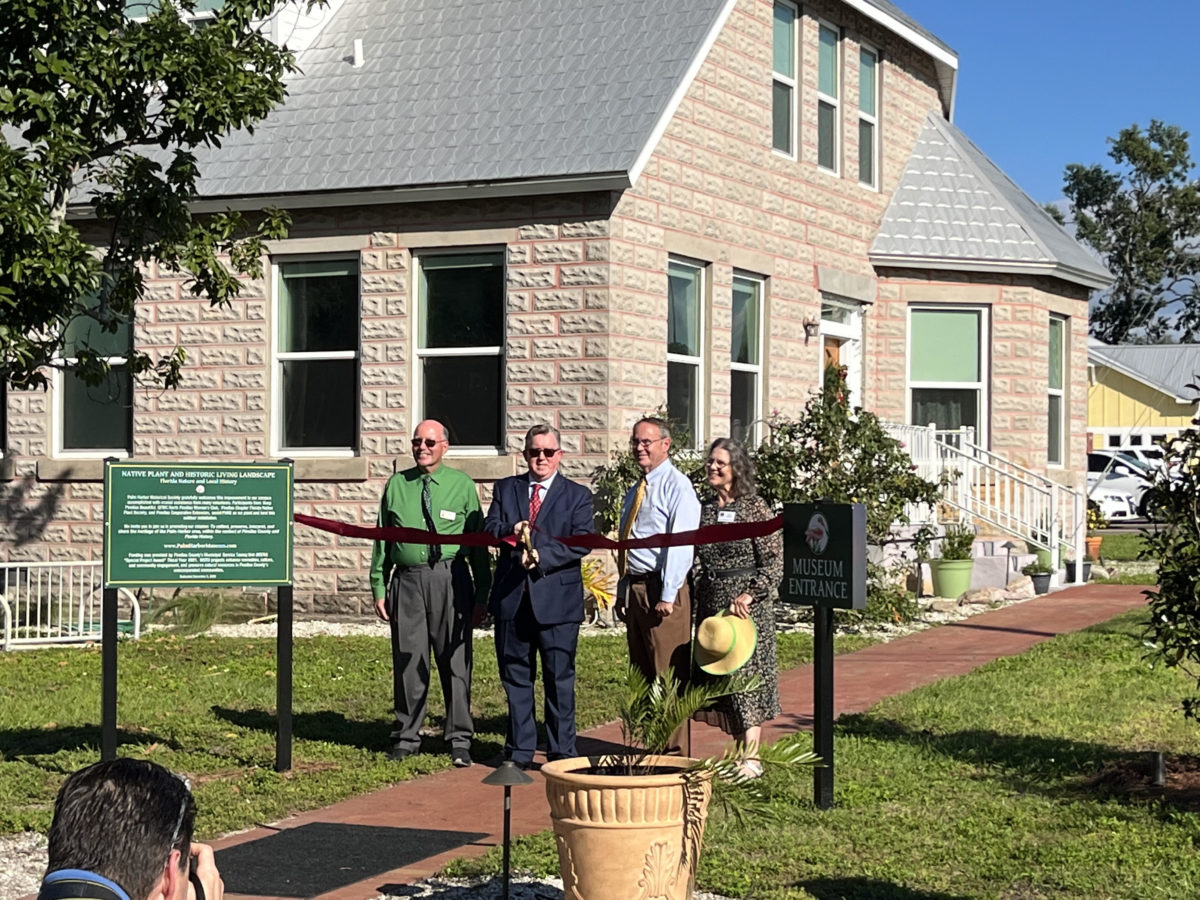 At the Palm Harbor Museum

The event began with an open house at the museum as volunteers and members of Palm Harbor Historical Society welcomed attendees and led informal tours. Volunteer Deanna Green is an informative guide who is passionate about the history of the landscape. A Palm Harbor resident since the 1970s, she remembers when the area was abundant with orange groves. “When you walked outside, it smelled amazing,” she said.

It was 18 months ago when we began meeting to set the intention to transform our museum campus into a pocket park featuring Florida native plants,” said Terry Fortner, Project Facilitator and Volunteer Coordinator, as she kicked off the ceremony. “We wanted our plantings to appropriately and directly support native species of animals. Our intention was also to create an outdoor exhibit with informational signage to highlight historical aspects of the property, including respectful acknowledgment for the indigenous first people of Florida, the subsequent use of this property by European Americans, and to highlight the essential ethnobotanical use of plants by humans in every era.”

Terry also acknowledged the contribution of Kira Graphics, in Oldsmar, which assisted with the signage; Pinellas County Government, for both guidance and funding; and Keep Pinellas Beautiful for their contributions during the four intensive workdays and with ongoing tending of the landscape. Terry noted there have been over 550 documented hours invested and the involvement of over 63 volunteers.

This was a big deal for our museum,” she said. “We invested a lot of careful attention in the written application, and after approval, the work to fulfill the vision got real . . . really fast.”

Evan Earle, Beautification Specialist for Keep Pinellas Beautiful, explained that the project brings diversity to the environment. “We now attract pollinators. We have berries for birds and animals, and we have a diversity of plants that will eventually fill in and create a nice barrier along Belcher Road.” The new landscape, he said, will allow people to see what Pinellas County and Palm Harbor used to look like many years ago.

Enjoy the museum,” Bob Fortner told the crowd in his closing remarks. “It’s your museum after all.”

Palm Harbor Museum invites volunteers who would like to help with ongoing care of the gardens. For information, call 727-724-3054 or email [email protected]. The museum is open Thursdays, Fridays, and Saturdays, 10 a.m. to 2 p.m. Admission is free. Donations are welcome.