The Wacky World of Bruce Barry 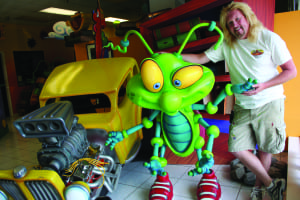 To say things are a bit wacky at Bruce Barry’s office is, well, a little bit of an understatement. From the outside, an unassuming Oldsmar office front belies an inside filled with whimsical fantasy, brilliant colors, bustling carpenters and painters, and a team of creative talent just bursting at the seams.

Here at Wacky World Studios, Bruce Barry is a wild-haired Wizard of Oz who oversees a creative universe. Ask him to define what he does, and he sets off like a rocket.

“We’re a full service art studio that designs creative themed environments,” he tries to explain. “We create everything from movie sets and rides for theme parks to museums, storefronts and church installations. We do everything from concept to building, sculpting, painting and animation.

“I call my style a cross between Disney and Dr. Seuss,” he adds. “But I can do anything.”

The World in Oldsmar 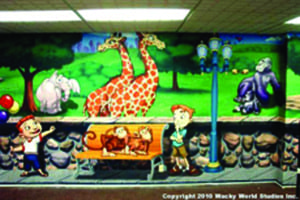 Wacky World Studios has been based in a 20,000-square-foot Oldsmar industrial park for 16 years. More than 30 talented artists, designers, carpenters, computer animators and administrators work in a maze of lime green, purple and orange offices filled with cartoon characters and massive workflow charts detailing the progress and deadlines for each job. In a back warehouse the size of an airplane hangar, busy workers create giant foam trains and airplanes amid buzzing machinery and rolling carts.

Despite the economy, business is booming. In fact, in early 2011 Wacky World will be moving just a few blocks away into a larger 23,000-square-foot facility.

For a Thursday, everyone at Wacky World seems to be in an unusually joyous mood. This appears to be nothing out of the ordinary. It seems everyone who works here has a hint of, um, happy wackiness. While he shoulders much of the artistic responsibility, Bruce has to admit he could not do it without his staff. “I have an incredible team and a visionary art director,” he admits.

His wife and partner Vivian Barry is an interior designer who develops Themes-To-Go for residential to large scale interiors (check them out by clicking on Themes To Go at www.wackyworldstudios.com). She and sales director Karen Johnson are the chief organizational and support team, helping the multi-tasking Bruce to keep the various jobs running smoothly. 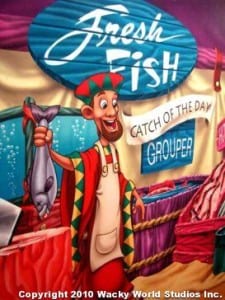 Wacky World clients range from churches to theme parks to theaters, museums, hospitals and restaurants. One day it’s a set for Broadway theater, the next it’s a 19-foot replica of Dale Earnhardt Jr. for an automotive trade show.

Bruce is currently working on designs for the next phase of the Shriners Hospital for Children.

“We are considered pioneers in themed children’s environments for churches and children’s hospitals across America,” says Bruce. Church design continues to be the cornerstone of Wacky World’s business, with projects across the country including Lakewood Church in Texas, Shadow Mountain Community Church in California and ChangePoint in Anchorage, Alaska. He is proud to point out his work at Countryside Christian Center just a few miles away in Clearwater where the Kid Zone is filled with Wacky World play stations and animated wallscapes of critters and other playful characters.

Bruce admits he’s beyond a Type A personality: his mind is always working, his creative juices always flowing. He’ll grab a pencil and sketch as the thoughts come.

“It’s like I have this out-of-body experience,” he says with a grin.

Take a look at an episode of his You Tube video series “The Wacky World of Bruce Barry” and you’ll get a sneak peek at the orderly mayhem that happens at the Oldsmar studio. This documentary/reality series which aired on the FamilyNet Television Network recently won a Southeast Regional Emmy Award.

As the son of Disney cartoonist Dick Barry (who also played Clarabelle the clown on the Howdy Doody Show), Bruce has creativity in his genes.

Welcome to the home of Bruce Barry … let the wackiness begin!