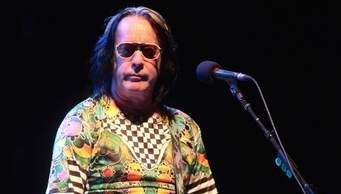 Todd Harry Rundgren is an American multi-instrumentalist, singer, songwriter, and record producer who has performed a diverse range of styles as a solo artist and as a member of the band Utopia. He is known for his sophisticated and often-unorthodox music, his occasionally lavish stage shows, and his later experiments with interactive entertainment. He also produced music videos and was an early adopter and promoter of various computer technologies, such as using the Internet as a means of music distribution in the late 1990s.

Todd Rundgren returns to the Bilheimer Capitol Theatre for an epic TWO night concert performing side one (A Wizard) on Wednesday, June 10th, and side two (A True Star) on Thursday, June 11th, of his iconic album A Wizard, A True Star, along with hit songs each night for the ultimate fan experience! Released in March of 1973, A Wizard, A True Star is a cerebral, poignant, reflective, & whimsical magical mystery tour that unifies highly divergent musical and lyrical elements into a suite. Rundgren’s best-known songs include: “Hello It’s Me”, “I Saw the Light”, “Bang the Drum All Day”, and “Couldn’t I Just Tell You”. He is also one of 16 Rock & Roll Hall of Fame Nominees for 2020. Wed, Jun 10 – Thu, Jun 11 @ Bilheimer Capitol Theatre

After two albums, Todd Rundgren had one hit and a burgeoning cult following, plus growing respect as a hitmaking record producer. There’s no question he was busy, but as it turns out, all this work only scratched the surface of his ambition. He had decided to abandon the Runt pretense and recorded a full double album by himself (save for one side). Others had recorded one-man albums before, most notably Stevie Wonder and Paul McCartney, but Rundgren — without borrowing musically from either artist — captured the homemade ambience of McCartney with the visionary feel of Music of My Mind, adding an encyclopedic knowledge of pop music from Gilbert & Sullivan through Jimi Hendrix, plus the crazed zeal of a pioneer.

Listening to Something/Anything? is a mind-altering trip in itself, no matter how many instantly memorable, shamelessly accessible pop songs are scattered throughout the album. Each side of the double album is a concept onto itself. The first side is “a bouquet of ear-catching melodies”; side two is “the cerebral side”; on side three “the kid gets heavy”; side four is his mock pop operetta, recorded with a full band including the Sales brothers. It gallops through everything — Carole King tributes (“I Saw the Light”), classic ballads (“Hello It’s Me,” “It Wouldn’t Have Made Any Difference”), Motown (“Wolfman Jack”), blinding power pop (“Couldn’t I Just Tell You”), psychedelic hard rock (“Black Maria”), pure weirdness (“I Went to the Mirror”), blue-eyed soul (“Dust in the Wind”), and scores of brilliant songs that don’t fall into any particular style (“Cold Morning Light,” “It Takes Two to Tango”). It’s an amazing journey that’s remarkably unpretentious.

He may have contributed self-penned liner notes, but Rundgren peppers his writing with self-aware, self-deprecating asides, and he also indulges his bizarre sense of humor with gross-outs (“Piss Aaron”) and sheer quirkiness, such as an aural tour of the studio at the beginning of side two. Something/Anything? has a ton of loose ends throughout: plenty of studio tricks, slight songs (but no filler), snippets of dialogue, and purposely botched beginnings, but all these throwaways simply add context — they’re what makes the album into a kaleidoscopic odyssey through the mind of an insanely gifted pop music obsessive. Rundgren occasionally touched on the sheer brilliance of Something/Anything? in his later work, but this extraordinary double album is the one time where his classicist songcraft and messy genius converged to create an utterly unique, glorious record.

Content and photographs coutesy of Todd Rundgren and All Music