We are proud of raising this amount, up 7% from last year, while we also provided an outstanding tournament with increased amenities for our fans,” says Ronde Barber, General Chair of Copperhead Charities.  “We are grateful to so many, especially our fans and all the people at Valspar and our other sponsors.”

Copperhead Charities, now has now generated roughly $48.7 million for charity since 1977 through the sponsorship of professional golf tournaments in the Tampa Bay area. 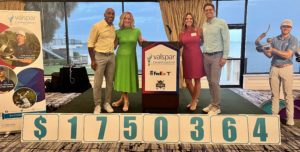 The total includes money raised through ticket sales and other tournament proceeds. Nearly 70 area charities are benefiting from the 2022 tournament.  Copperhead Charities made many directed donations in 2022 with Tampa General Hospital, Habitat for Humanity of Pinellas and West Pasco Counties, St. Petersburg College Foundation, and area chapters of The First Tee among the key charities benefiting.

Sam Burns won the Valspar Championship for the second consecutive year on March 20.  In the process, his career earnings on the Copperhead course rose to a tournament record $2,817,442.

We are proud of our contributions to the Tampa Bay community in six decades,” says Tournament Director Tracy West.  “The $48.7 million contributed to charity is $10 million more than the combined total of the prize money won by the top 25 pro golfers in tournament history.  Unlike some other pro golf tours, charity is a huge component of the PGA TOUR.  Going over $50 million next year will be a huge milestone for us.”