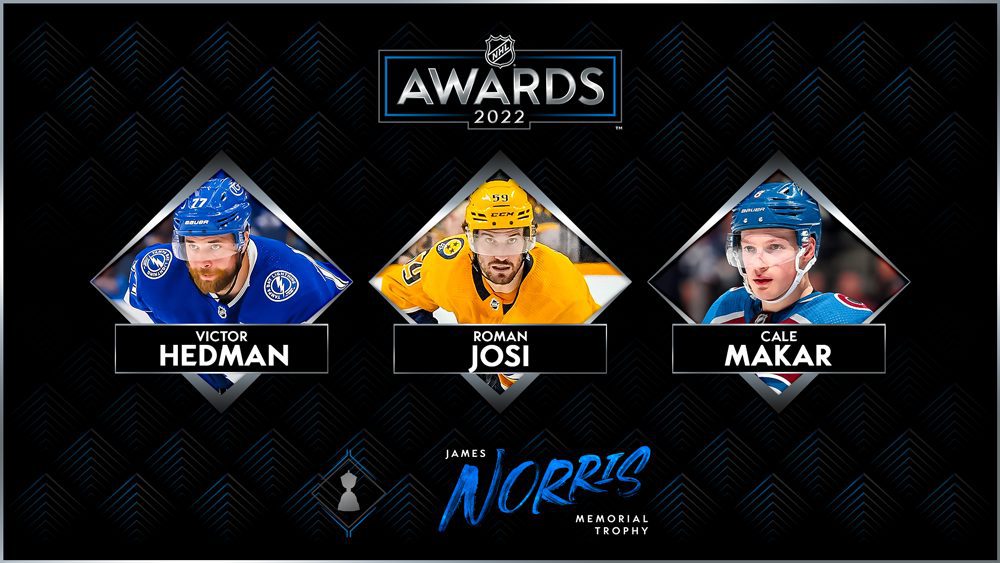 Victor Hedman of the Tampa Bay Lightning, Roman Josi of the Nashville Predators and Cale Makar of the Colorado Avalanche are the three finalists for the 2021-22 James Norris Memorial Trophy, awarded “to the defense player who demonstrates throughout the season the greatest all-round ability in the position,” the National Hockey League announced today.  Members of the Professional Hockey Writers Association submitted ballots for the Norris Trophy at the conclusion of the regular season, with the top three vote-getters designated as finalists. The winners of the 2022 NHL Awards will be revealed during the Conference Finals and Stanley Cup Final, with exact dates, format and times to be announced.

Following are the finalists for the Norris Trophy (in alphabetical order):

Josi became the NHL’s highest-scoring defenseman in 29 years, posting 23-73–96 in 80 games to help the Predators (45-30-7, 97 points) make the Stanley Cup Playoffs for the eighth consecutive season. Only six defensemen in the past 50 years have surpassed Josi’s 96 points in a single campaign: Paul Coffey, Phil Housley, Brian Leetch, Al MacInnis, Bobby Orr and Denis Potvin. Josi set career highs in goals, assists and points, broke the single-season Nashville franchise records among all positions for points and assists, recorded the most assists by any NHL defenseman since Sergei Zubov’s 77 in 1993-94 and led all blueliners with 26 multi-point games. His 281 shots on goal were 41 more than the second-ranked defenseman in 2021-22 and his 59 even-strength points were the most since Ray Bourque’s 59 in 1986-87. Josi is a Norris finalist for the second time; in 2019-20 the Predators captain made franchise history by becoming the first Nashville blueliner to bring the Norris to Music City.

Did You Know This About Norris Trophy Finalists

The Norris finalists all eclipsed 80 points in 2021-22, marking the first time in 28 years that as many as three blueliners surpassed the milestone in a single season. The 1993-94 campaign saw future Hall of Famers Ray Bourque (91), Sergei Zubov (89) and Al MacInnis (82) do so.

The James Norris Memorial Trophy was presented in 1953 by the four children of the late James Norris in memory of the former owner-president of the Detroit Red Wings.