Warehouse Arts District: Where Art Is Made 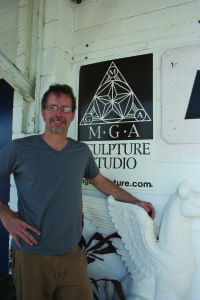 Turn right at the end of the chain link fence, past Ace Recycling but just before the strip mall. Don’t blink or you’ll miss the turn. Head back behind the white building, walk around the old paint cans and rusting machinery and you’re there. Inside a sprawling industrial warehouse complex west of downtown a half dozen artists conceive and create a mix of art ranging from massive bronze sculptures to large-scale glass installations and delicate landscape paintings.

This 8,000-square-foot complex is home to MGA Sculpture Studio, C Glass Studio and the brand spanking new Soft Water Studios. It is also ground zero for the newly dubbed Warehouse Arts District, a gritty industrial neighborhood west of Interstate 275 that is attracting urban creatives from across Tampa Bay and the country with its large spaces and low rents.

East of the interstate in the shadow of Tropicana Field lies St. Petersburg’s Grand Central District, a pedestrian-friendly retail neighborhood along Central Avenue, 1st Avenue North and South. Grand Central District is a mish-mash of boutiques, antique shops, bars and restaurants, small galleries, studios and apartments. For young urban professionals and downtown artsy types, Grand Central is the place to hang out.

Hit a baseball across I-275 and you’ve found the Warehouse Arts District. Although it overlaps with the west end of the Grand Central District, the area encompasses Central Avenue and south to the interstate as it curves toward the beaches. 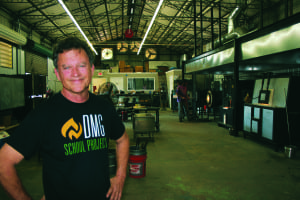 “We have been an arts community without a label for many years,” says sculptor Mark Aeling, who presides over the board of some 40-plus artists and supporters who are members of the fledgling organization.

“There are close to 200 artists currently working in this area,” he says. “But what separates us from the other art institutions like the Dali and Museum of Fine Arts, is that we are not only galleries but we have studios where you can see art being made — and many of us offer classes. This is where art is made, which is our moniker.”

Jeff Schorr was one of the area’s first gallery homesteaders. Six years ago, he converted a sprawling 1918 Arts & Crafts bungalow on Central Avenue in the Kenwood Historic District into a fine art gallery-café with a kiln and pottery studio in the carriage house. The Craftsman House Gallery provides space for artists-in-residence to make and sell their work. It has also evolved into a community center for concerts, workshops and artists who just want to hang out and socialize. Across the street, Nuance Galleries moved in with the studio of artist Andrea Pawlisz.

Schorr remembers a decade ago when the idea of an urban arts district was not on the radar for St. Petersburg city officials.

“Zoning and permitting hurdles were the main impediment,” Schorr recalls. “Back then the city simply did not know how to deal with the whole notion of an artist. It took me two years and three months to go through the whole permitting process.”

In the last several years, however, a renaissance has taken place. The opening of new museums and galleries and an influx of artists has awakened city officials to the importance of a vibrant arts community. In July 2010, the Morean Arts Center opened the Chihuly Collection, a museum featuring the work of renowned Seattle glass artist Dale Chihuly. Then, the opening in January 2011 of the new Dali Museum, an architectural gem, created international buzz to become one of the area’s premier tourist draws.

Hundreds of locals and visitors began venturing to downtown St. Petersburg to investigate the burgeoning arts scene. This past February, the Warehouse Arts District provided a trolley to transport Second Saturday attendees around the warehouse district. Thousands converged, encouraging the board to enlist two trolleys for the Second Saturday Art Walk in March and link into the Central Avenue Trolley.

“Once Duncan moved here, he brought a lot of energy and good connections with the city,” said Mark Aeling. “He brought the attention of Mayor Baker, city officials and investors … people who understood the importance of the arts not just to the community but to tourism.”

St. Pete Is an ‘Arts Destination’

In the heart of the Warehouse Arts District, the Train Station Center for Clay stands as a testament to the power of historic renovation in a stressed neighborhood. The 1926 Seaboard Train Station served as a freight depot until 1967, when it began to be used for a variety of businesses, such as offices, a flea market, feed store, an import and antique business and a warehouse.

Today, the Train Station Center for Clay is home to the St. Petersburg Clay Company (SPCC) and attracts world-class potters for workshops attended by hundreds each year. Owned and operated by Adam Yungbluth and Matt Schiemann , SPCC serves as a teaching facility for the Morean Arts Center for Clay, and provides gallery space, retail clay supplies, and studio space in which artists can work.

“The city did an economic impact study about five years ago and realized that the arts are very important,” says Valerie Scott Knaust, Clay Program Manager for the Morean Arts Center and on the board of the Warehouse Arts District. “Now the city is growing behind us, and we are being recognized as an arts destination on a national level.’’

But along with progress comes the domino effect. Warehouse space is getting tight now and rents are going up. Artists worry that they may be forced out; they already see it happening.

“This is not a huge industrial town, it’s a resort town with a finite amount of industrial space,” says Aeling. “A lot of the space south of downtown is now getting bought up by developers. It’s important to keep spaces affordable. If they aren’t, the artists will go away. High rents will be unsustainable for artists.”

The board is seeking non-profit status as a 501 (c3), says Aeling. “The hope is this might allow us the opportunity to purchase property so we can maintain artists and establish longevity,” he says.

One business that is growing and thriving is Grand Central Stained Glass and Graphics, neatly situated on the cusp of both Grand Central and the Warehouse Arts districts. Owner Brad Erickson is now in his third space, having outgrown his previous two storefronts all on the same block. His business provides custom stained glass, stained glass classes and graphic design services.

“There is a real sense of cohesiveness and support among all the artists and businesses, no competitiveness.” says Erickson. “It’s an exciting time to be here now.”

Story and Photos By Marcia Biggs 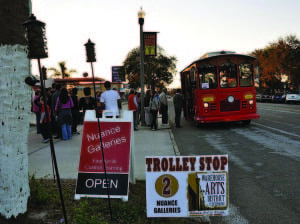 Second Saturday Art Walks are held the second Saturday of the month from 5 to 10 pm. A free parking lot for trolley riders is on the northeast corner of Central Avenue and 29th . For updated information on trolley stops along with a list of participating galleries, go to www.warehouseartsdistrictstpete.org