‘We Need to Have the Courage to Grow Smarter!’ 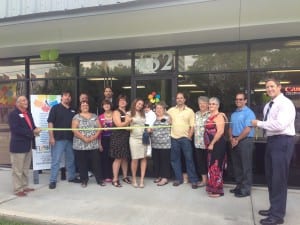 When Christopher Steinocher returned to the St. Petersburg Area Chamber of Commerce in 2011 as President and CEO, it was like returning home. He had worked there nearly two decades before.

In between, Steinocher spent 20-plus years developing his marketing, networking, and financial skills at Tampa Bay area institutions – all while raising a family and operating a small business in St. Petersburg.

Steinocher comes to his current role with a mantra: “We need to have the courage to grow.”

When Steinocher took his post at the St. Pete Chamber a little over three years ago, the top slot had been vacant for nearly six months and the Chamber had slipped from its prestigious designation as the largest chamber in the Tampa Bay area. In 2010, the St. Pete Chamber had cut its staff by one-third, and its budget had shrunk by nearly 13 percent. In the two years since his return, Steinocher has begun to reverse that decline. Now the Chamber has more than 920 business members, representing more than 2,300 individuals.

“We have reached out to our members, listened to their concerns, and formulated strategies for helping their businesses grow and prosper in St. Pete,” he wrote at the beginning of this year. “There is a tremendous sense of pride and loyalty in our community….”

In a sense, Steinocher has been building to this point in his career ever since he earned a bachelor’s degree from Atlanta’s Emory University. Prior to taking his new post at the Chamber in February 2011, Steinocher was COO and Senior Vice President of Marketing and Business Development at the Tampa Bay Partnership in Tampa – a position he held for 17 years.

And prior to that, he was the Assistant Vice President of Marketing for Fortune Bank, a Tampa Bay-based bank with 46 branch locations throughout Florida’s west coast. In total, he has more than a quarter century experience in marketing and community development, 23 of which have been in the St. Petersburg area.

Christopher Steinocher and his wife, Juli, have two sons, and one of his goals with the Chamber is to “ensure the city does everything it can to be so attractive to my two sons (now in elementary school) that they will never want to move to another place.”

Steinocher’s family roots reach way back in this area. Growing up, he and his father used to come down to St. Pete Beach to visit his grandfather, a World War I veteran. It was then young Steinocher began to develop a sense of the city’s “comfortable neighborhoods” and community.

When he took his first position with the Chamber in 1989-1990, he started working in the same building he now oversees. “I literally walked in the same door 20 years ago,” he said, pointing to where a door used to be, “and said, ‘I want to work here.'”

And so he did, back in the days when working at the Chamber meant answering phone calls and faxes from curious tourists, passing out brochures and mailing out literature: the very basics of promotion and marketing. That kind of deja vu can be an even deeper community bonding experience.

Today, instead of brochures and faxes, the St. Petersburg Area Chamber of Commerce markets itself through the Internet and social media. Today, Steinocher talks in terms of “the chamber’s DNA.” And sees his job as a “community builder,” finding ways to build upon the city’s very many accessible attributes, its wide streets and open sidewalks, the largest marina in the Southeast, museums and restaurants, the Tampa Bay Rays, Beach Drive and much more.

But there’s more to a successful community.

The community leader would like to see the “sunshine” come back to St. Pete as well. He thinks the moniker Sunshine City should be revived – ideal for the key community in the Sunshine State. “Sunshine is a very optimistic thing. The sun shines every day. We wake up with sunshine every morning.”

St. Petersburg is a great place to live and work, and it’s Christopher Steinocher’s job to tell the rest of the world about it!